Arizona St travels to Colorado in matchup of interim coaches 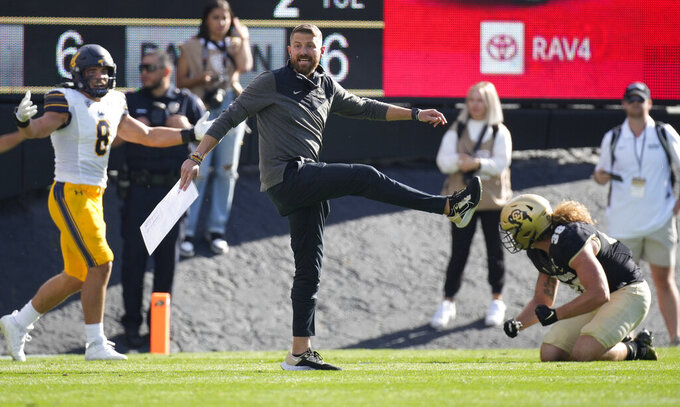 Colorado interim head coach Mike Sanford signals for a field goal with a kicking motion to the bench in the second half of an NCAA college football game against California at Folsom Field, Saturday, Oct. 15, 2022, in Boulder, Colo. (AP Photo/David Zalubowski)

Line: Arizona State by 13 1/2, according to FanDuel Sportsbook

This is a game featuring two interim head coaches — Shaun Aguano for Arizona State and Mike Sanford for Colorado. Aguano has a 1-3 mark since taking over for Herm Edwards, while Sanford is 1-1 after stepping in for Karl Dorrell. The Sun Devils are trying to win at Folsom Field for the first time since 2014. They’re also attempting to break a string of five straight losses in road/neutral site games. Colorado will induct nine into its hall fame this week, including linebacker Greg Biekert, tailback Charlie Davis and offensive lineman Jay Leeuwenburg. The Sun Devils beat Colorado 35-13 last season in Tempe.

Arizona State tailback Xazavian Valladay needs less than 100 yards rushing to reach 4,000 for his career. He has 97 runs of 10 or more yards since 2018, which ranks fourth among active FBS running backs, the school said. Colorado has allowed 253.7 yards rushing a game, which is second-to-last in the nation.

Arizona State: Defensive lineman B.J. Green, who's been credited with 15 quarterback pressures this season. He boasts a 85.3 grade as a pass rusher, according to the Sun Devils. That’s seventh-best among interior linemen who have at least 90 pass-rushing snaps this season.

Colorado: Kicker Cole Becker has 97 career points in 19 games. He could become the 10th-fastest in team history to reach the 100-point plateau. Tailback Chris Brown and kicker James Stefanou both eclipsed the mark in 13 games.

Arizona State’s Khoury Bethley has taken 3,092 career snaps, the most of any active FBS safety. ... The Buffaloes have been held to 20 points or under and less than 350 total yards in every game this season. ...Colorado has a 65-36-5 mark on homecoming. ... Buffaloes assistant Darian Hagan will coach in his 150th game for the team Saturday. It’s the fifth-most all-time for coaches at Colorado. ... QB J.T. Shrout had a career-best 206 yards passing last weekend in a 42-9 loss at Oregon State.