Arizona State looking to take next step under Herm Edwards 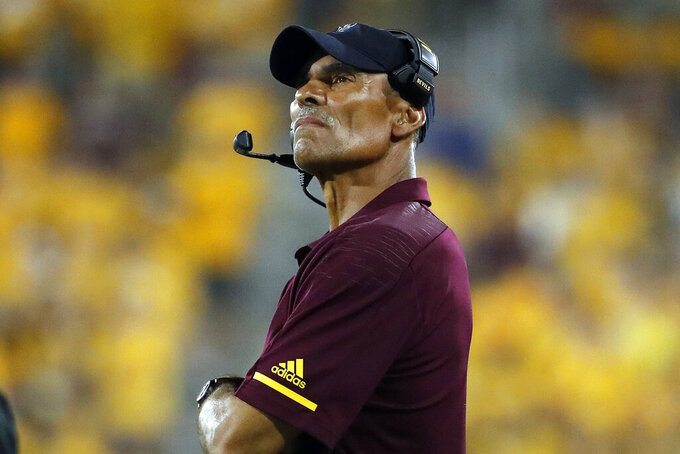 Arizona State coach Herm Edwards watches during the second half of the team's NCAA college football game against Oregon State on Saturday, Sept. 29, 2018, in Tempe, Ariz. After posting a winning record during his first season, securing a trip to a bowl game, and a monumental comeback against Arizona State's biggest rival, the expectations, at least outside Tempe, were exceeded. (AP Photo/Matt York)

TEMPE, Ariz. (AP) — Arizona State was not given much of a chance under coach Herm Edwards. Some even mocked the Sun Devils for hiring the former NFL coach and TV analyst.

After posting a winning record during his first season, securing a trip to a bowl game, and a monumental comeback against Arizona State's biggest rival, the expectations, at least outside Tempe, were exceeded.

The Sun Devils hope to do it again under their loquacious coach.

"I think it takes some time to earn their trust," Edwards said. "That's what I asked them to do for me, let me earn your trust and I think I've done that. Now we can continue to build a program."

Arizona State set the foundation under Edwards last season, finishing 7-6 and rallying from a 19-point second-half deficit to knock off rival Arizona in the regular-season finale.

The Sun Devils have plenty back, but they also have holes to fill at key positions, most importantly quarterback.

Because of the uncertainty and perhaps because people still underestimate Edwards, Arizona State was picked in the preseason media poll to finish tied for third with UCLA in the Pac-12 South.

That's up from No. 6 a year ago, so there's progress there, too.

A few things to look for from Arizona State in 2019:

QUARTERBACK BATTLE: Arizona State didn't have to worry about who would play quarterback the previous three seasons with Manny Wilkins entrenched as the starter. Now that Wilkins has graduated, the Sun Devils faced a decision after entering training camp with four players competing for the spot. Two weeks before the opener, Edwards announced it would be Jayden Daniels, making him the first true freshman to start at quarterback in program history. The 6-foot-3, 175-pound Daniels was one of the top dual-threat quarterback recruits and he practiced with the Sun Devils in spring football after graduating early. He will be backed up by another true freshman, Joey Yellen.

BREAKING BENJAMIN: The Sun Devils have nothing to worry about at running back with Eno Benjamin in the backfield. He set a school record with 1,642 yards rushing — fifth nationally — and was a third-team Associated Press All-American in 2018. The 5-foot-10, 201-pound junior is expected to have an even greater impact this season, appearing on pretty much every preseason watch list for running backs, All-America teams, whatever. Benjamin behind an experienced offensive line should give Arizona State a good offensive foundation while it breaks in a new starting quarterback.

DEFENSIVE PLAYMAKERS: Arizona State had one of the nation's worst secondaries just two seasons ago but took a big step forward last year. The Sun Devils should be even better in 2019 with a year of experience. Linebacker also will be a strength with Merlin Robertson, the 2018 Pac-12 freshman of the year, Darien Butler and Tyler Johnson back for their sophomore seasons. The big question will be up front. Arizona State lost nose tackle Renell Wren and will be breaking in several new players on the defensive line.

RECEIVING CORPS: Arizona State lost a big target and one of the nation's best receivers when N'Keal Harry opted to leave Tempe for the NFL after his junior season. The Sun Devils still have a talented group left, led by Kyle Williams, Brandon Aiyuk and Frank Darby. They have plenty of experience and should be a big help to the quarterback, whoever it ends up being.