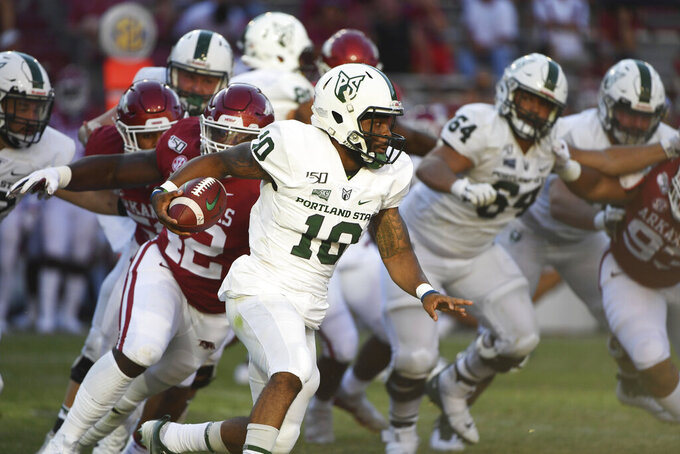 FAYETTEVILLE, Ark. (AP) — Chad Morris was candid when asked about his team's offensive performance in a narrow season-opening 20-13 win against Portland State on Saturday.

With 11 new starters on offense following last season's dismal 2-10 effort, the offensive mastermind whose offenses were explosive at both Tulsa and Clemson when he was the country's highest paid offensive coordinator, pulled no punches Saturday.

"It was not the performance I wanted to see," Morris said. "Just very disappointed. We never got into a rhythm."

The Razorbacks rushed for 204 yards, which was a bright spot, Morris said. But the combined 18-of-35 passing effort from transfer quarterbacks Ben Hicks and Nick Starkel was well below what Morris envisioned when they joined the program.

Arkansas struggled to sustain drives and had a number of poor passes and others that were dropped.

"I though Nick did well, I thought Ben did well," Morris said. "Neither did anything that would shock you. I thought Ben managed the game, got us into some right calls. I thought he was just OK."

Hicks won the starting job earlier this week, but Morris said both quarterbacks would play Saturday. Both did, but Starkel, the transfer from Texas A&M, played just two series. The first ended in an interception at the Portland State goal line. The second ended with the clock running out in the first half with Arkansas again in scoring range.

"I was signaling to clock the ball and we had one of our signalers to run it again, so that was a miscommunication," Morris said. "I thought we had a chance to kick a field goal, so that's on me and I'll get that corrected."

Junior running back Rakeem Boyd was a bright spot offensively for Arkansas with 114 yards on 18 carries. Boyd's third quarter touchdown, set up by a Jarques McClellion interception, gave Arkansas a little breathing room with a 17-6 lead with 2:20 left in the third quarter.

Most of Arkansas' struggles on offense can be attributed to the Vikings' defense. Portland State brought pressure the entire game with a flex front and dropping linebackers deeper to take away the short passing lanes.

Portland State coach Bruce Barnum was pleased with the play of his defense.

"The yards are there but the points are not," Barnum said. "We buckled up in the red zone and made them kick. So very happy with the way our defense played, but the bottom line is I'm not going to accept losing."

Portland State drove for a late fourth quarter score behind backup quarterback Jalani Eason, who eluded an Arkansas rush and fired a 32-yard dart to tight end Charlie Taumoepeau to pull the Vikings within 20-13 with 4:14 left. Eason came in for starter Davis Alexander, who suffered a shoulder injury to his non-throwing shoulder.

"We knew we were going to get their best shot and we did," Morris said. "We will be able to correct off of this and see this football team improve going into a big game next week in Oxford."

The explosive offense that Morris was promising when he was hired in December 2017 has yet to materialize. The Razorbacks looked sluggish most of the day and Hicks, the graduate transfer from SMU, missed several open throws when he wasn't under pressure from the Portland State defensive front. He finished 14 of 29 passing for 143 yards, but no turnovers. Starkel, who transferred from Texas A&M, had a costly interception late in the first half to stop a scoring opportunity.

"They had their way with us," said Barnum, "but my team got after it. We were trying to make plays. We did not throw in the towel."

WHERE FOR ART THOU, ROMEO?

A number of freshmen saw significant playing time for Arkansas. Treylon Burks and Trey Knox, both true freshmen, started at receiver for the Razorbacks. Burks had three catches for 52 yards and Knox caught one pass for 38 yards.

Portland State sophomore kicker Cody Williams showed off a strong right leg with a pair of long field goals. Williams knocked through a 50-yarder to give the Vikings an early 3-0 lead, then added a 47-yarder in the second quarter.

Vikings backup quarterback Jalani Eason played well in relief after Alexander went out with an injury, completing 6 of 11 passes for 74 yards and a 32-yard touchdown strike to All-American tight end Charlie Taumoepeau late in the fourth quarter.

PLAY OF THE GAME

Arkansas' defensive unit was a force the entire game, bringing constant pressure on both Portland State quarterbacks. Senior defensive tackle McTelvin Agim, a 6-3, 300-pounder, showed off his speed by chasing down Alexander from behind 15 yards downfield to prevent a Vikings first down to stop a drive. That was the play that Alexander suffered his injury on.

Arkansas: The Razorbacks open Southeastern Conference play on the road next week at Mississippi. Game time is set for 6:30 p.m.