Arkansas ready to move on from close loss to Auburn 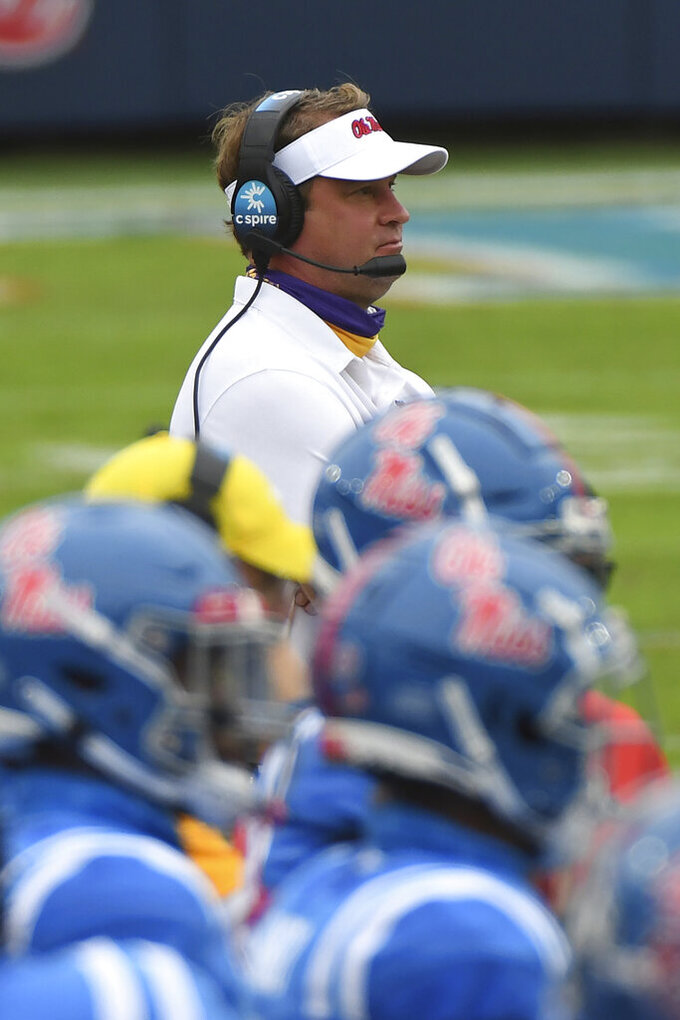 FILE - In this Saturday, Sept. 26, 2020, file photo, Mississippi head coach Lane Kiffin watches on from the sideline during the first half of an NCAA college football game Florida, in Oxford, Miss. Kiffin's first season at Mississippi has been anything but boring so far: Three straight shootouts, a quarterback putting up huge numbers and the nation's worst defense statistically. (AP Photo/Thomas Graning, File)

FAYETTEVILLE, Ark. (AP) — Arkansas coach Sam Pittman is ready to put the controversial ending to last week's two-point loss to No. 13 Auburn in the rearview mirror.

With under 30 seconds left and his team trailing 28-27, Auburn quarterback Bo Nix fumbled a snap, then picked the ball up to spike it and stop the clock. The controversy stems from Nix turning his back to the line of scrimmage and spiking the ball backward.

Pittman said he never spoke to the team about the call.

“I’ve heard from the head of officials and I’m at peace with it,” Pittman said.

Instead of dwelling on the recent past, Pittman said his staff will try to figure out a way to help the Razorbacks (1-2) slow Ole Miss and its prolific offense on Saturday. The Rebels (1-2) lead the conference in total offense, averaging 573 yards.

The Rebels lost a 63-48 shootout to No. 2 Alabama last week, which was tied at 42 early in the fourth quarter and was an eight-point game with under two minutes left.

Ole Miss won’t be at full strength. Rebels coach Lane Kiffin said the team is having COVID-19 issues and the team will have “a number of guys out.”

“We had that during camp,” he said. “This is the first time dealing with it in-season. It’s very difficult moving people around, and we’re beat up, too, from high play count, intense game and playing a great team Saturday. We are not in a great situation number-wise at all.”

Other things to know when Arkansas meets Mississippi on Saturday:

Pittman said the Razorbacks have not been focused early in games. He said that was the case when they fell behind Auburn 17-0 last week.

“We don’t start fast because we don’t start pregame fast,” Pittman said. “We’re out there basically saying, ‘Look at me, look how good I look in my uniform,’ and we’re not getting ready for the football game. And that’s got to stop. And that’s our fault, my fault. We’ve got to get our players going in pregame warmups. We’ve got to knock heads a little bit.”

MATT ON THE MARK

Redshirt sophomore quarterback Matt Corral has flourished in Kiffin’s offense through three games. The 6-1, 205-pounder from California has torched the Southeastern Conference, going 67-of-88 passing for 1,080 yards and nine touchdowns with just one interception. Against Alabama, Corral was 21 of 28 for 405 yards and two touchdowns.

“They’re incredible,” Pittman said. “They are scary to watch, but they are fun to watch and it all starts with their quarterback."

Pittman said there are a lot of similarities between the two teams offensively, and with good reason. Arkansas first-year offensive coordinator Kendal Briles was an assistant coach on Kiffin’s staff at Florida Atlantic before coaching at Florida State last season.

“I would hope he’d say he learned some things offensively,” Kiffin said of his former assistant coach. “I know when we watch him, we see a lot of carryover from FAU, stuff that we did together that he kept at Florida State and now there (at Arkansas).”

Linebackers Bumper Pool and Grant Morgan are among a number of Razorbacks nursing injuries this week. Last week, Arkansas was without offensive playmakers Rakeem Boyd and Treylon Burks, but Pittman is hopeful the team will be close to full health this week.

“We’re pretty beat up as a football team right now,” Pittman said. “We’ve got to get some guys back, but we’re playing extremely hard. Awful happy with their effort. We have to be a bigger team. We’re getting hit and we’re getting hurt. Teams are just bigger than we are. It’s a big man’s league."

“We did (have conversations with Arkansas),” Kiffin said. “I’m not going to get into complete detail about that. I knew the athletic director from interviewing with him at Houston, so I knew him before. I think he does a great job, great guy to work for.”