Arkansas rockets past No. 14 Ole Miss behind Sanders' 3 TDs 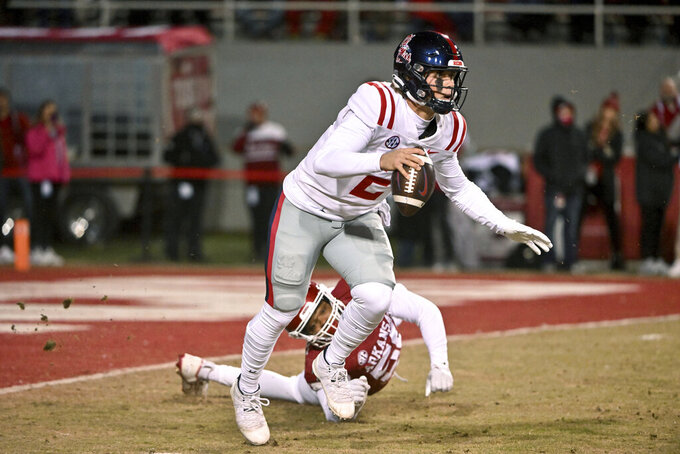 Mississippi quarterback Jaxson Dart (2) tries to get away from Arkansas defensive lineman Jashaud Stewart (58) during the first half of an NCAA college football game Saturday, Nov. 19, 2022, in Fayetteville, Ark. (AP Photo/Michael Woods)

Sanders rushed for 232 yards and three touchdowns, including a 68-yarder on the opening drive of the second half, in a 42-27 rout of No. 14 Ole Miss on Saturday night.

“He played extremely well,” Arkansas coach Sam Pittman said. “Any running back that carries the ball for 100, 150 yards, they’ve got to have a break, most of the time, they’ve got to have one or two that’ll be a 30-, 40-yard pop. Certainly, that’s what he (got) tonight.”

The Razorbacks had a 35-6 halftime lead, and the Rebels' 21 fourth-quarter points made the game appear closer than it was.

Sanders averaged 9.7 yards on 24 carries, helping Arkansas (6-5, 3-4 Southeastern Conference) snap a two-game skid and become bowl-eligible. He gained 153 yards in the first half.

Jefferson returned from an injury, going 17 of 22 passing for 168 yards and three scores. Matt Landers added two touchdown receptions for the Hogs.

Ole Miss (8-3, 4-3, No. 14 CFP) moved the ball and had chances early. But holding penalties nullified two touchdown passes from Jaxson Dart. The Rebels lost a fumble, were forced to settle for two field goals on promising drives and missed a field-goal try.

“Very discouraging, obviously,” coach Lane Kiffin said. “I didn’t feel we were flat. We were moving the ball. We just played really poor in the red zone. Two touchdown passes called back, and we didn’t tackle very well. It just shows you the value of turnovers. Give those guys credit. Senior night, they played really hard, ran the ball really well.”

Ole Miss: The Rebels were outclassed in the wake of a tough 30-24 loss to Alabama, but they can’t let the setback linger since bitter rival Mississippi State looms.

Arkansas: The Razorbacks looked like a different team, especially on offense, after being upset by Liberty and dropping a tight game against LSU.

Ole Miss will almost certainly tumble out of the Top 25.

This story has been corrected to show Mississippi is ranked 14th in the AP Top 25.