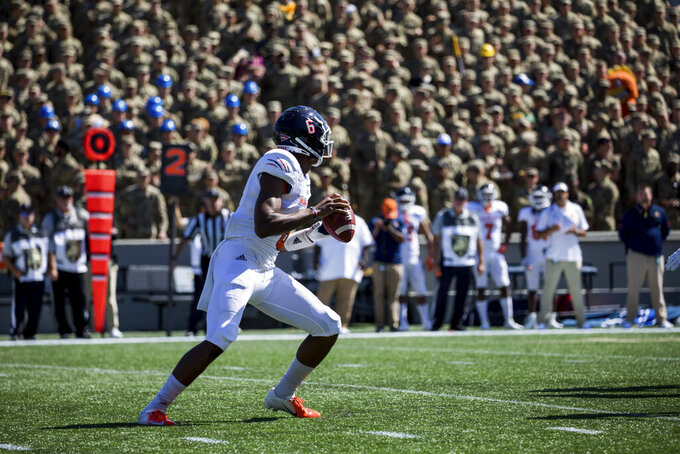 Morgan State Bears quarterback DeAndre Harris (6) gets ready to pass before the whistle is blown during the first half of an NCAA college football game, Saturday, Sept. 21, 2019 in West Point, N.Y. (AP Photo/Julius Constantine Motal)

WEST POINT, N.Y. (AP) — Not even a 31-point victory was enough to put a smile on Army coach Jeff Monken's face.

Army rushed for six touchdowns and a season-high 403 yards on Saturday, but had to overcome some sloppy play that included two lost fumbles and seven penalties to beat struggling Morgan State 52-21.

The Bears, who compete in the Championship Subdivision, haven't won a nonconference road game since a 28-3 win over Bowie State five years ago, but they led the Black Knights 14-7 early in the game before fading.

"I didn't think that was up to our standards," Monken said. "That's as much to do with me as any individual player. Good enough to win the game, not good enough against everyone else we play. We've got to do better."

Artice Hobbs IV scored twice and Connor Slomka rushed for a career-high 110 yards and another score to pace the Army ground game. But Morgan State (0-3), which started the season with two bad road losses — 46-3 to Bowling Green and 63-12 to FCS power James Madison —under new coach Tyrone Wheatley, stunned Army with two straight scores in the first quarter after the Black Knights had gained a 7-0 lead on a 9-yard run by Hobbs.

DeAndre Harris hit Manasseh Bailey with a 69-yard touchdown pass down the middle on a third-and-14 play to tie the game with 5:32 left in the first. Four plays later, Army quarterback Jabari Laws was blindsided and fumbled and Malachi Washington recovered for the Bears. Jabriel Johnson scored on a 25-yard run on the next play for a 14-7 lead.

The lead didn't last. It was a lead, nonetheless, against a better team.

Army (3-1) extended its winning streak to 15 straight at home and boosted its record against Morgan State to 3-0, all at Michie Stadium. Though the Black Knights intercepted three passes and recovered a fumble, the defense allowed 308 yards, just 32 yards fewer than then-No. 7 Michigan had in a double-overtime victory over Army two weeks ago.

"We came out in the first half and second half with low energy, not really focused on the task at hand. Couldn't tell you the reason for it," Army defensive back Elijah Riley said. "We shouldn't come out any game with low energy. Going forward, we're just going to have to lock it in, not allow another game like this to take place."

Secretary of State Mike Pompeo, a 1986 graduate of West Point, participated in a ceremony on campus Saturday morning and had the honors of performing the coin toss before the game.

Morgan State: Despite a slew of 11 penalties — six false starts in the first half alone — the Bears held their own in the opening half, a positive sign going forward. They were picked to finish eighth in the Mideastern Athletic Conference.

Army: The Black Knights can't continue giving the ball away at such an alarming rate if they want to maintain the level of excellence they've established in the past two seasons, winning 21 games. Army played its second straight game without starting quarterback Kelvin Hopkins Jr., who is nursing a leg injury but did come in for one play. With a bye week ahead, Hopkins should be ready to return.

Wheatley decided it was time to gamble after Army had scored 17 straight points to take a 24-14 lead. Facing a fourth-and-5 near midfield, Harris's pass fell incomplete. It didn't cost the Bears — their defense forced a three-and-out. Wheatley gambled again late in the third and Harris hit Wesley Wolfolk with a 7-yard pass on a fourth-and-3. Two plays later, Harris hit Bailey for a 23-yard score.

"The receivers are bright spots right now," Wheatley said. "They're running great routes. I'm really proud of what they're doing right now. We've just got to get our running backs and offensive line on the same page."

Army entered the game with seven turnovers — the Black Knights had only eight in 13 games last year — and now has nine just four games into the season.

Morgan State running back Demerius Goodwin was injured on a helmet-to-helmet hit in the third quarter. He raised his right arm and appeared to be talking before he was placed on a stretcher and taken away in an ambulance. Wheatley said Goodwin was being evaluated at the campus hospital.

Army has a bye week before hosting Tulane on Oct. 5.