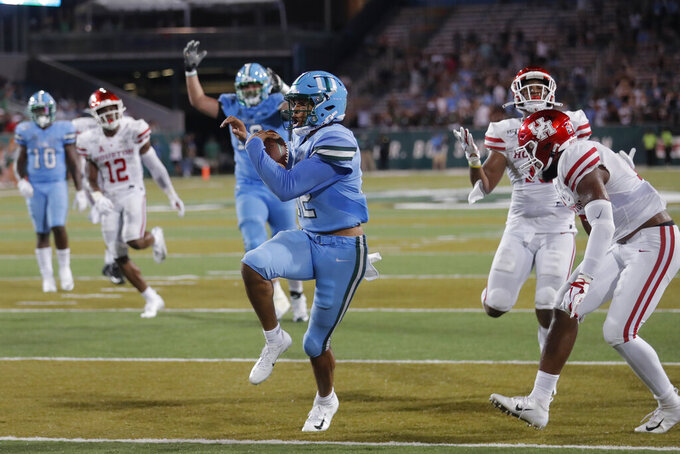 Tulane quarterback Justin McMillan (12) runs the ball in for a touchdown during the second half of the team's NCAA college football game against Houston in New Orleans, Thursday, Sept. 19, 2019. Tulane won 38-31. (AP Photo/Gerald Herbert)

WEST POINT, N.Y. (AP) — Army coach Jeff Monken is back in a good frame of mind after a bye week, but the memory of a sloppy comeback victory over a team from college football’s second tier still lingers.

Two turnovers, too many missed blocks and some shaky pass coverage in a 52-21 win over Championship Division foe Morgan State aren’t so easy to forget as midseason nears.

"It felt nice to get a win, a little bit frustrating with the way we kind of found ourselves getting to that victory,” Monken said. “Hopefully, we’ve corrected some of those errors and improved as a team.”

Tulane (3-1) visits on Saturday and likely will offer some answers. The Green Wave, also coming off a bye, are off to their best start in 16 years and have beaten Army (3-1) two straight times, including 21-17 two years ago with a touchdown in the final minute.

“The last time we played Tulane, they scored on the first play of the game on a 75-yard touchdown run ,” Monken recalled. “That's a tough way to start a game, so we're going to need to start better."

The Green Wave, whose only loss was to Auburn, are coming off an impressive 38-31 home win over Houston. Tulane overcame a 21-point deficit and won the game with help from a trick play that set up Jalen McCleskey’s 53-yard catch-and-run touchdown with 3 seconds left.

Tulane is favored in the game despite Army’s spotless home record and coach Willie Fritz has tried to keep everything on an even keel.

“I haven't really talked to them all that much,” Fritz said. “It is just about consistent behavior by me, the coaching staff and the senior leaders. You have to drown out the noise. You just have to worry about what is good for the team _ it is very simplistic.”

Other things to know when Tulane visits Army on Saturday:

Army is riding a 15-game winning streak at Michie Stadium as the Black Knights seek to go undefeated at home for the third straight season.

“When we trot out to Michie, the expectation that you’re going to win is just a different type of energy level, confidence that you carry in as a group,” senior linebacker Cole Christiansen said.

Expect the game to whiz by. Led by the trio of dual-threat QB Justin McMillan, Darius Bradwell and Corey Dauphine (each over 200 yards rushing), the Green Wave have rushed for over 250 yards three times while Army’s triple option is averaging 293.5 yards.

“What we’ve got to do is be able to run the football effectively, which is the way that we’ve been able to have success here,” Monken said. “Sustain drives, score touchdowns, and to try to keep them from doing the same. It's something that they've been really good at.”

Army starting quarterback Kelvin Hopkins Jr. has missed the last two games with a leg injury but is back practicing. Jabari Laws got the nod against Morgan State but was knocked out of the game by a blindsided hit and was relieved by Christian Anderson. All three are ready to go, and Hopkins is itching to return.

“It’s not as fun as I remember (to sit). You just feel like you could be out there helping the guys,” Hopkins said. “It’s just hard when you’ve kind of been out there for a year and a half and standing there and watching things happen.”

Though Army’s lone loss was in double overtime at then-No. 7 Michigan, the Black Knights have been careless with the ball, losing seven fumbles to go with one interception. That’s a notable switch from the previous two seasons (10 lost fumbles combined), which produced 21 victories and last year a national ranking (No. 19) at season’s end.

“We’re very cognizant of the fact that we’ve turned it over at a much higher rate,” Monken said. “Hanging onto the ball has helped us win a lot of football games. Hopefully, we’ve seen the last of them.”

Fritz coached Georgia Southern for two years after Monken departed for West Point in 2013, Tulane defensive coordinator Jack Curtis served in that role under Monken for the last three years of Monken’s tenure at Georgia Southern, and two current Army assistants played for Fritz in college.

“It's an interesting dynamic,” Monken said. “We know that they are going to be very well-prepared.”