Around the Pac-12: Cal, yes Cal, is the lone undefeated 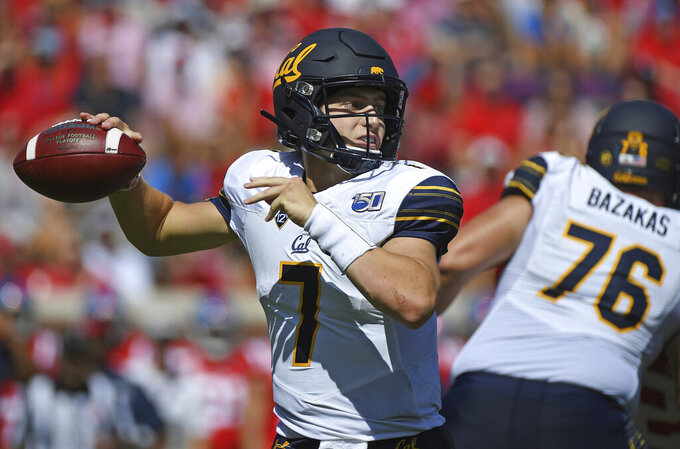 Yes, they certainly do.

The Golden Bears not only emerged with a dramatic 28-20 victory over Ole Miss last weekend but the win also left them as the lone undefeated team in the Pac-12.

Cal (4-0, 1-0) is among the league's biggest surprises going into Week 5 of the season. Also surprising? The Trojans finding ways to win big games at home even when faced with considerable challenges. And the previously winless Bruins knocking off Washington State in spectacular fashion.

The Pac-12 is the only Power 5 conference with just one undefeated team left. Heading into last weekend, there were four, but the Cougars, Utah and Arizona State all lost as the league cannibalized itself.

Cal, meanwhile, was becoming the first Pac-12 team to win on the road against the SEC since 2010, when Oregon beat Tennessee 48-13 in Knoxville. The Bears jumped from No. 23 to No. 15 in the AP rankings as a result.

The victory was dramatic. Cal linebacker Evan Weaver tackled Ole Miss quarterback John Rhys Plumlee for no gain at the 1-yard line as time expired. Just before that, Plumlee had completed a third-down pass to Elijah Moore at the 1 with less than 15 seconds remaining.

Mississippi coach Matt Luke pleaded with the officials to stop the clock for a look at the replay, but the Pac-12 officiating crew quickly marked the ball at the 1-yard line and the Rebels attempted, unsuccessfully, to score on Plumlee's quarterback sneak.

The Pac-12 issued a statement Sunday night saying it had confirmed that officials correctly ruled that Ole Miss "did not score a touchdown and there was no irrefutable video evidence to reverse those calls by replay." But the conference also said it would have "supported" stopping play in this instance for a review to confirm the call.

"We find a way to make it interesting. I love the way we battled, we played good in stretches and not so good in others," Wilcox said after the game. "Some of that is on us, some of that is on the other team. So, coming down here and playing in this type of environment against talent like that and the coaches they have, I feel really excited for our team and we still have a lot of room for improvement."

The Golden Bears also knocked off Washington on the road in that weather-delayed Pac-12 After Dark thriller.

And there's a reason: They're solid, especially on defense, with one of the best secondaries in the league. And Weaver is a force.

Weaver had a career-high 22 tackles against Ole Miss, breaking his high of 18 set in the game at Washington. He's had at least 10 tackles in 11 straight games. For the second time in the past three weeks he was named the Pac-12's Defensive Player of the Week.

Overall, Cal's defense has held opponents to fewer than 24 points in 11 straight games. This season they're only allowing an average of 17.2 points per game. They've also got 11 sacks, tied for second in the league behind Oregon (15).

"Defense is their calling card," Arizona State coach Herm Edwards said. "They've done a nice job of playing strong defense. They've won some games that are impressive, to be quite honest. Going down there in the SEC conference and winning a game like that is an impressive win for them. They're 4-0, they're the only undefeated team in the Pac-12, says a lot about who they are."

Other surprises in the Pac-12 heading into Week 5:

BRUINS' BIG WIN: Goodness, where to start? Winless UCLA (1-3, 1-0) rallied from a 32-point deficit in the second half to beat Washington State 67-63 in the highest-scoring game in league history. The Bruins scored 50 points in 19 minutes.

Sophomore quarterback Dorian Thompson-Robinson set a UCLA record with 564 yards of total offense, including a career-high 507 passing yards and five touchdowns. He was named the Pac-12's Offensive Player of the Week.

At the same time it was a surprising meltdown for the Cougars (3-1, 0-1). Anthony Gordon threw nine touchdown passes and WSU still lost the game.

THE TROJANS: Clay Helton's seat got a little less hot following No. 21 USC's 30-23 victory Friday night over the Utes. And the Trojans pulled it off with a third-string quarterback.

Combine that with an earlier win over Stanford, and USC tops the South with a 2-0 conference record.

One downside, the conference's chances at a College Football Playoff berth just got way narrower. Whereas Utah was favored to win the South, and still could, only Cal and Oregon seem to have a sliver of a CFP hope now. The Golden Bears likely need to go undefeated and the Ducks need Auburn to keep winning.

Oh, and the Golden Bears visit the Ducks on Oct. 5.