Around the Pac-12: Injuries lead to shuffling QBs 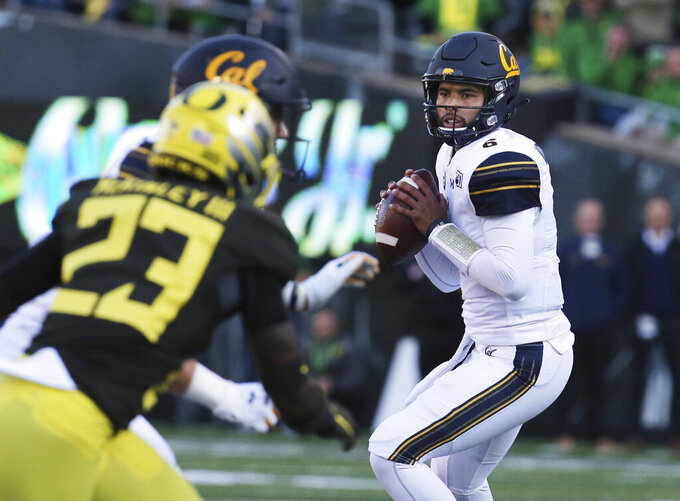 The nickname Conference of Quarterbacks has taken on a new meaning as injuries have led to a revolving door between starters and backups for many Pac-12 teams.

From USC reaching down into its depth chart, to the absences of established veterans K.J. Costello at Stanford and Khalil Tate at Arizona, this has been a rough season for quarterbacks.

Eighteen different quarterbacks have started games so far this season in the league, compared to 20 for all last season.

One of the newcomers is Devon Modster, who is taking the reins at California (4-1, 1-2) while Chase Garbers recovers from an apparent shoulder injury. Garbers is out indefinitely.

Modster, a UCLA transfer who had to sit out Cal's first three games after committing to the Golden Bears in December, was pressed into service when Garbers was injured during a 24-17 loss at home to Arizona State. Modster struggled, throwing for 23 yards and an interception in the end zone.

He fared better last weekend, when Cal put up a fight against No. 13 Oregon at Autzen Stadium before falling 17-7. Modster threw for 190 yards and the Golden Bears' lone touchdown of the game. But he also threw two picks.

"I thought he handled himself really well. There were a couple of throws in there that he can make, that we didn't quite connect on, but I thought he was calm, I thought his demeanor was good," Cal coach Justin Wilcox said. "I think he's going to keep improving the more that he plays."

The Golden Bears have a bye this weekend.

A look at some of the other teams that have faced injuries at QB:

USC: The Trojans are the most extreme example when it comes to the position. Sophomore JT Daniels started in the opener against Fresno State but he was injured in the first half and needed season-ending surgery to repair a torn ACL. Freshman Kedon Slovis made his debut in a surprise victory the next week over Stanford, throwing for 377 yards and three TDs. But then Slovis was knocked out of USC's game at home against Utah with a concussion, forcing the Trojans to turn to third-string QB Matt Fink.

Fink led the team to victory against the Utes but struggled in a 28-14 loss to Washington with three interceptions.

The junior had been on the brink of transferring at the start of the summer but decided to stick it out.

"I did some research, I went to some schools. Had some unofficial visits and an official visit with Illinois and met some great coaches and great players and built some good relationships. But this team is stacked. You have the best players in the nation here. I'm saying that SC is on the rise," Fink said. "We have guys that are going to push us to the top here."

It is likely Slovis will return this weekend when USC (3-2, 2-1) visits No. 9 Notre Dame on Saturday.

STANFORD: Davis Mills has started a pair of games for Costello, including last Saturday's 23-13 upset of Washington. Mills threw for 293 yards and a touchdown in the game but came out in the fourth quarter with what appeared to be a calf injury, making way for sophomore Jack West.

On Tuesday, Stanford coach David Shaw provided a preliminary update for the Oct. 17 game against UCLA: Mills is in pain but there's no major damage so he'll be questionable for the game, as will Costello. West will take most of the reps in practice in the coming days.

ARIZONA: The Wildcats weathered the one-game absence of Tate when freshman Grant Gunnell took over and threw for 352 yards and a touchdown in a 20-17 victory over UCLA. Tate returned last weekend from an ankle and hamstring injury and threw for a career-high 404 yards and three touchdowns in a 35-30 win on the road over Colorado.

UCLA: Sophomore Austin Burton made his first start in the Bruins' 48-31 loss at home to Oregon State last weekend. He threw for 236 yards and a touchdown, while also running for a score, in place of Dorian Thompson-Robinson, who was knocked out of the loss to the Wildcats the week before with an apparent ankle injury.

"Did OK. I think I left some plays on the field, moved the ball, and I know we had some long drives. But at the end of the day, it comes down to winning and losing as a quarterback," Burton said. "Especially as the quarterback, you have to be the leader of the team, and I personally don't think I got the job done."