Around the Pac-12: Top RBs look for yards in short season 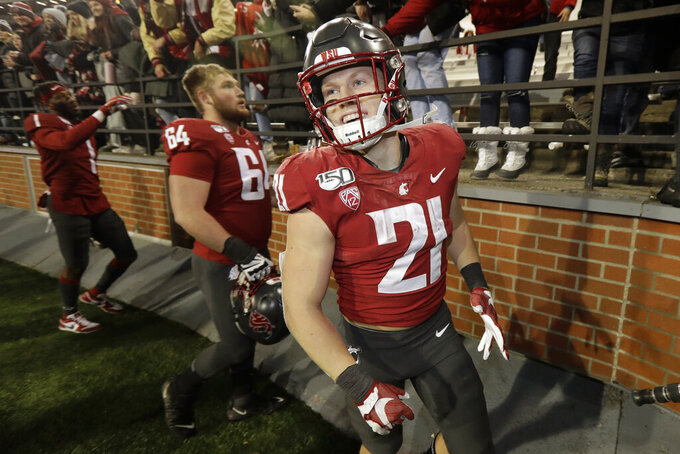 After thriving under coach Mike Leach and the Air Raid, Washington State running back Max Borghi has been presented with a new challenge in Nick Rolovich's run-and-shoot offense.

Borghi never considered opting out. And he didn't think of transferring when the Pac-12 season was put on hold.

“I plan to finish my whole career here,” he said.

Borghi is among several gifted Pac-12 running backs who have returned for this coronavirus-shortened season, joining Oregon’s CJ Verdell and Oregon State’s Jermar Jefferson, among others.

Borghi ran for 817 yards and had 597 yards receiving, with 16 total touchdowns, as a sophomore last season under Leach, who left in the offseason for Mississippi State. He was the only Power Five running back with as many rushing and receiving yards.

Borghi said this year's Cougs will look a bit different and his role will change, too.

“Honestly, with this offense, the running back doesn’t get out of the box and get as many receptions as I was used to with the Air Raid," he said. "But obviously, there’s still screens that can happen and then a little bit of slot action, maybe, as well. So I should be interested to see how that plays out."

Other Pac-12 running backs to watch heading into the season:

Known for a strong running game since Chip Kelly's tenure as coach, the Ducks look to continue the trend with Verdell back after he rushed for 1,220 yards and eight touchdowns as a sophomore last season.

Verdell is among seven returning FBS-level rushers to return for 2020 after consecutive 1,000-yard seasons. He says his goal is to reach that mark again, which may be tough in a short season.

“My dad always told me to shoot past the stars, and if you fall short you’ll still be amongst the stars," Verdell said. “So I always set my goals is really high for myself. Definitely looking forward to hopefully accomplishing that.”

There was no question Verdell would return.

“That never crossed my mind. Not even once," he said. "I always knew that I wanted to come back and play for Oregon. I felt like I had a lot more to give to the university and the football team, so leaving or opting out never really crossed my mind."

Oregon also should see production from running backs Travis Dye and Cyrus Habibi-Likio. The No. 12 Ducks host Stanford to open the season on Saturday.

“I’ve been feeling really good this year. And I feel a lot quicker. A lot faster. I’ve gained weight since last year. The stuff I’ve been doing helps keep me safe and healthy,” Jefferson said. “I’ve been getting extra stretching, I stretch every night before I go to sleep. Cold tubs help a lot.”

A junior, Fontenot rushed for 874 yards and five touchdowns and had 27 catches for 122 yards last season. Like Borghi, he is also adjusting to a new coach, Karl Dorrell.

However, Fontenot won't be available for the Buffaloes' season-opening game against UCLA after he was injured in practice, and it's uncertain when he'll return.

“He was counting on himself coming back from a pretty good sophomore year and coming in and playing this year. It’s unfortunate that he’s dealing with an issue, but it’s not surgical, which is a good thing,” Dorrell said.

But the coach also left open the possibility Fontenot would not play at all.

“This is a short season and no one’s losing eligibility this year, so we hope to have him back at some point this year and if not, then we’ll have him ready to go next year in the fall,” Dorrell said.

The versatile junior ran for 914 yards and eight touchdowns while logging 166 receiving yards for another four scores. Despite that output, he was banged up for most of the season.

“Chris is also one of those guys we gotta protect him from himself a little bit. Every run at practice he wants to finish it 40 yards down the field, he want to take every rep, he’ll carry the ball every time if you let him," Cal coach Justin Wilcox said. "So part of that will be how we use him in the game situations. There’s also some guys in that room that can do some good things for us.”