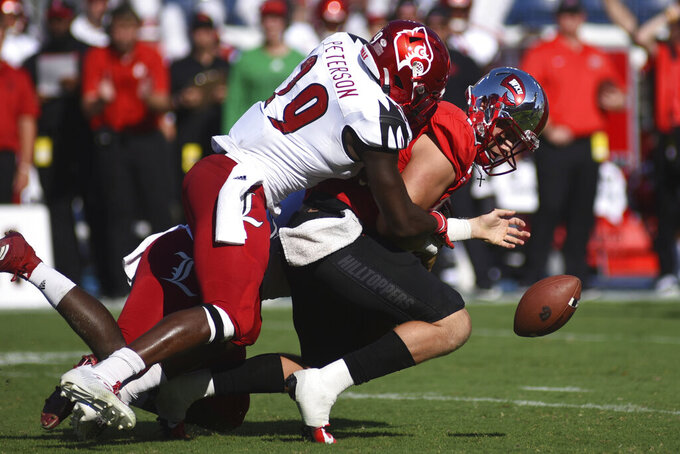 NASHVILLE, Tenn. (AP) — No starting quarterback, no problem for the Louisville Cardinals in their 38-21 victory over Western Kentucky on Saturday in a neutral-site nonconference game at Nissan Stadium.

Louisville announced prior to kickoff that starting quarterback Jawon Pass would miss the game due to a foot injury. Redshirt sophomore quarterback Malik Cunningham directed four first-half scoring drives before leaving in the third quarter following a hit to the head. True freshman Evan Conley finished up and threw a 62-yard touchdown pass on his second throw of the game as the Cardinals (2-1) dominated the Hilltoppers (1-2).

In fact, Louisville coach Steve Satterfield hinted after the game that he would be fine playing any of the Cardinals' top three quarterbacks so long as whoever is under center moves the offense.

"We always go into every week (seeing) who's healthy. That's obviously No. 1. And who's going to give us the best chance to move the offense? I don't care. I tell our quarterbacks all the time, 'I don't care who plays. I really don't.' I just want whoever is playing to move our offense," Satterfield said. "As we go throughout the week, we'll evaluate it. I think our team feels good about anybody that's playing. Evan came in and did a good job. I think they love Malik and they love (Pass). Whoever gives us the best chance of winning, that's what our team wants from our quarterback."

Cunningham, who could have gone back into the game according to Satterfield, completed 7 of 10 passes in the first half for 114 yards and two touchdowns as Louisville built 31-7 halftime lead. A 9-yard shovel pass to Tutu Atwell gave Louisville a 7-0 first-quarter lead with 4:18 left. On the Cardinals' next offensive series, Cunningham and Atwell hooked up again on a 46-yard touchdown throw.

Western Kentucky closed to within 14-7 when Steven Duncan found Joshua Simon for a 77-yard TD pass. But the Hilltoppers gave up 17 unanswered points to close out the first half, including a 30-yard score on a fumble return by Rodjay Burns with 47 seconds remaining in the first half.

Hilltoppers first-year coach Tyson Helton said the Cardinals dominated his squad at the line of scrimmage, and that was the difference in the game.

"They just overpowered us, to be honest with you. Defensively for them, they controlled the line of scrimmage. They were able to hold the point and control it," Helton said. "I thought the O-line battled. They were doing the right things. They just got a little bit outmatched here and there. Defensively for us, I think they do a good job in the run game. They can cover the whole field. I thought our defense did fairly well. They moved the ball, but we were able to keep them at bay, but they were able to get those shots down the field, and that's what really hurt us."

For the game, Cunningham completed 8 of 13 passes for 119 yards and added 46 yards rushing on 16 carries. He left with 4:54 remaining in the third quarter on a hit by Western Kentucky's Jeremy Darvin that knocked his helmet off.

Louisville: No matter the quarterback, Tutu Atwell proved to be a big-play receiver for Louisville on Saturday. He caught four passes for 141 yards for the Cardinals, with three of the receptions going for touchdowns. Atwell caught touchdown passes of 9, 46 and 62 yards on Saturday. The Cardinals were balanced on offense with 205 yards passing to go with 210 yards rushing.

Western Kentucky: After trailing 31-7 at halftime, Western Kentucky's offense played much better in the second half, but it was highly one-dimensional. Steven Duncan, who had a 77-yard touchdown pass for the Hilltoppers' only first-half points, threw for two more scores in the second half and finished 25 of 47 for 245 yards. Gaej Walker, who came into the game ranked 11th in FBS with 252 yards rushing, was held to 41 yards on 14 attempts.

Louisville: The Cardinals, now 2-1, move into Atlantic Coast Conference play next Saturday when they travel to face Florida State. The Cardinals' win Saturday was their first win away from Louisville since a November 2017 victory over arch-rival Kentucky.

Western Kentucky: The Hilltoppers, who fell to 1-2, have a bye week upcoming. The Hilltoppers will play host to Conference USA foe Alabama-Birmingham on Sept. 28 in WKU's first conference game of the season.