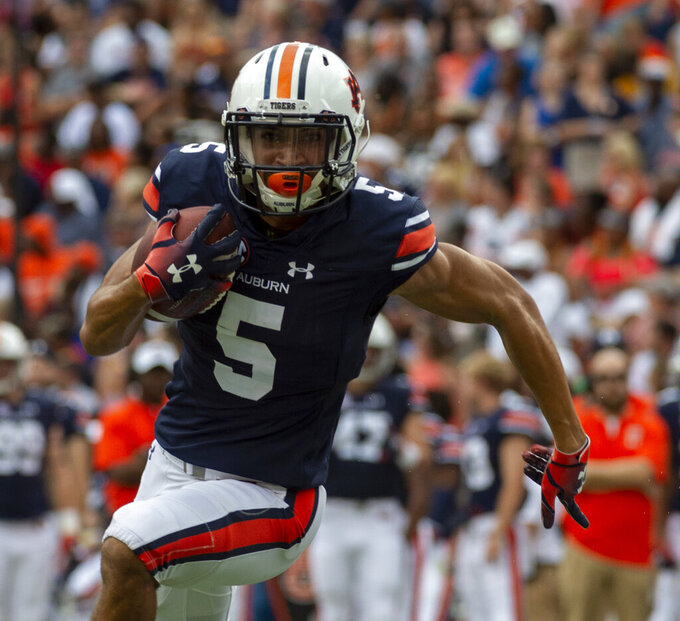 FILE - In this Sept. 29, 2018, file photo, Auburn wide receiver Anthony Schwartz (5) turns the corner and runs undefended into the end zone for a touchdown against Southern Miss during the first half of an NCAA college football game, in Auburn, Ala. Schwartz is a track standout who made plays running and catching last season. (AP Photo/Vasha Hunt, FIle) 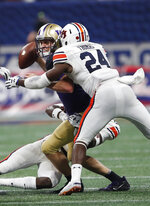 AUBURN, Ala. (AP) — Auburn coach Gus Malzahn is banking on his own his play calling abilities and a freshman quarterback to carry the Tigers through a difficult schedule.

Malzahn went back to calling the offensive plays in the Tigers' bowl game, returning to his roots and the role that ultimately helped him land a Southeastern Conference head coaching job and a $49 million contract.

The early returns were positive to say the least with a 63- 14 rout of Purdue in the Music City Bowl.

That performance set a more upbeat tone in the offseason for a team that opened in the Top 10. The Tigers finished with a disappointing 8-5 record, leading to questions about Malzahn's job security.

He understands that "that's just part of this job."

"We weren't happy with the way that we only won eight games last year, and our players weren't," Malzahn said. "We had guys that came back and they're hungry and our staff is hungry."

Malzahn had big seasons in 2013 and 2017 but has won a more modest eight games three times and seven once. He hired Kenny Dillingham as offensive coordinator after Chip Lindsey left for Kansas before taking the Troy head coaching job.

The schedule includes a nonconference game with Oregon and a visit to Florida.

If Malzahn is successful in duplicating his old play calling success, that would go a long way toward quieting the job security questions. Malzahn is turning his offense over to a freshman after the early departure of two-year starter Jarrett Stidham for the NFL. The question is, which one?

Redshirt freshman Joey Gatewood, whose only action came in the bowl blowout, and five-star recruit Bo Nix were the last candidates standing after the spring.

"The good thing is, I think we've got two good options," Malzahn said before preseason camp. "It's going to be a fierce battle."

Here are some things to know about Auburn's team and season:

Auburn is loaded with experienced big men on both sides of the ball. The defensive front is led by Brown, Marlon Davidson and Nick Coe — all of whom opted to return after exploring their NFL draft prospects. Coe could play tackle or end.

It's definitely the most-hyped unit on Auburn's team.

"There's a lot of talk about us being the top-rated group," Brown said. "We're just going to go in every single day and work blue-collar and work like we're in the last place in what we do. That's our attitude about it."

Offensively, all five starters return from a line that had its share of struggles last season.

The Tigers must replace their two leading receivers Darius Slayton and Ryan Davis, but do have talent at the position. Schwartz is a track standout who made plays running and catching last season. He's recovering from hand surgery, leaving his status in doubt for the opener against Oregon. Williams is a big-play threat who averaged 20.5 yards on 26 catches. Eli Stove and Will Hastings are back from injuries.

For all Stidham's abilities as a passer, Gatewood and Nix both seem figure to have more success running. And they'll likely be called on to do so much more frequently than the dropback passer. Malzahn's Auburn offenses have most thrived with running quarterbacks, notably 2010 Heisman Trophy winner Cam Newton and Nick Marshall.

The Tigers open in Arlington, Texas, Aug. 31 against an Oregon team picked to win the Pac-12 North.

Sept. 21 at Texas A&M, Oct. 26 at LSU; Nov. 16 Georgia, Nov. 30 Alabama. The Tigers must face four teams that finished last season ranked among the Top 7 but do host Georgia and Alabama in November.