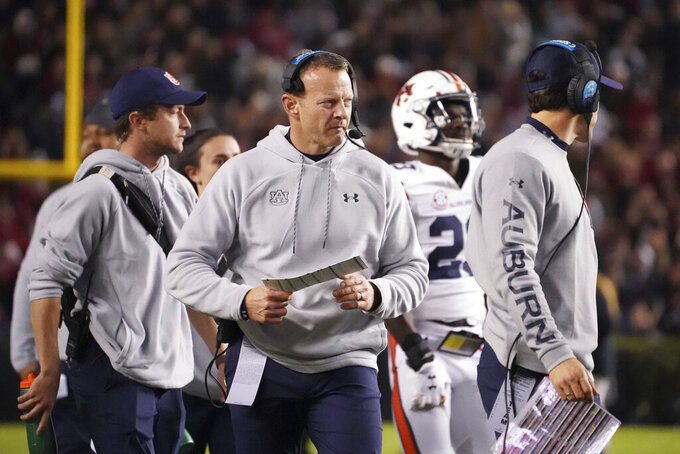 FILE - Auburn head coach Bryan Harsin walks near the sideline during a timeout in the first half of an NCAA college football game against South Carolina on Nov. 20, 2021, in Columbia, S.C. Harsin says he is “not planning on going anywhere” as he tries to navigate a tumultuous offseason of turnover in his program. Auburn went 6-7 in its first season under Harsin, who was hired away from Boise State a little more than 13 months ago. (AP Photo/Sean Rayford, File)

Auburn coach Bryan Harsin says he is “not planning on going anywhere” as he tries to navigate a tumultuous offseason of turnover in his program.

"I’m the Auburn coach, and that’s how I’m operating every day,” Harsin told ESPN late Thursday. “I want this thing to work, and I’ve told our players and told everybody else there is no Plan B. I’m not planning on going anywhere. This was and is the job. That’s why I left the one I was in, to come here and make this place a championship program and leave it better than I found it.”

Auburn went 6-7 in its first season under Harsin, who was hired away from Boise State a little more than 13 months ago.

The Tigers have had 18 players enter the transfer portal and five assistant coaches leave the program since the end of the season. Earlier this week, recently hired offensive coordinator Austin Davis announced he was resigning for personal reasons. Last month, defensive coordinator Derek Mason left for Oklahoma State.

”I just want you know we’re trying to separate fact from fiction," Auburn President Jay Gogue said at a board of trustees meeting Friday, according to AL.com. "We’ll keep you posted and make the appropriate decision at the right time.”

Among the players who left the program was Central Florida defensive tackle Lee Hunter, who criticized Harsin's handling of players in a social media post Friday.

“Coach Harsin has the true mindset for a winner but has a terrible mindset as a person,” Hunter wrote on Instagram. “The reason I chose to leave auburn because we got treated like we wasn’t good enough and like dogs.”

Harsin forcefully pushed back on what he called an “attack on my character.”

Other players came to Harsin's defense.

"We didn’t need a best friend we needed a coach … that’s what we had," linebacker Chandler Wooten tweeted.

“He is the leader I want to have in my corner,” tight end John Samuel Shenker posted on Twitter. “If you have a problem with his Discipline, Toughness, and Conviction that he instills in his players than get your entitled, selfish, and soft tail out away (from) this program.”

Harsin’s contract runs through the 2026 season and averages $5.25 million per season. If he is fired without cause, Auburn would owe Harsin 70% of the remaining value of the deal.

Harsin replaced Gus Malzahn, who was fired after last season and received a buyout of $21.45 million.