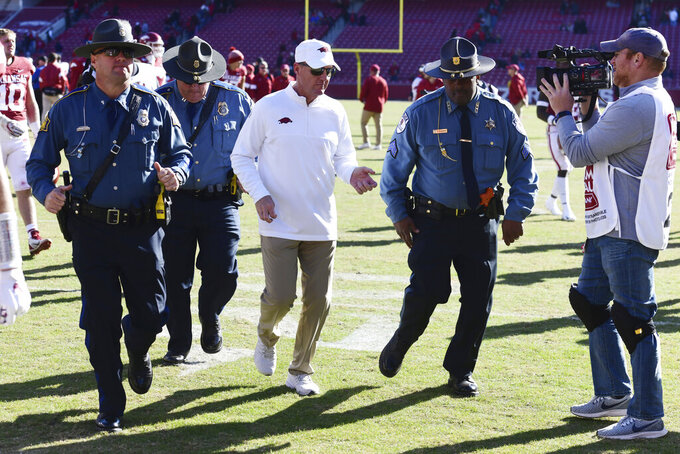 Morris failed to win an SEC game in nearly two full seasons with the Razorbacks, but he has an impressive track record as an offensive coordinator.

Morris was also SMU's head coach from 2015-17 after four seasons running the offense at Clemson.

Like Malzahn, he built a name for himself as a high school coach; Morris in Texas and Malzahn in Arkansas.

Morris replaces Kenny Dillingham, who appears set to join Mike Norvell at Florida State after one season. Malzahn resumed calling plays last season but it's not clear who will handle those duties after the hiring of Morris.

“I’m super excited to have Chad Morris join our staff at Auburn," Malzahn said. “He’s a tremendous offensive mind who has had success with several top-ranked offenses during his time in the college ranks. I’ve known Chad for almost 20 years and he is a tireless worker and a perfectionist.

“He is a great addition to our program and I look forward to him helping Auburn win championships.”

Morris led SMU to its first bowl bid in five years with a 7-5 record in 2017. The Mustangs' offense went from 128th nationally in scoring the year before his arrival in 2015 to eighth in 2017.

But he couldn't do the same at Arkansas, where he went 4-18 and lost all 14 SEC games. Morris was fired less than 24 hours after a 45-19 loss to Western Kentucky.

He helped Clemson win 41 games and set 127 offensive records in four seasons. During that time the Tigers posted the top three scoring seasons in school history and four of the top five passing seasons.

“I’m very grateful for the opportunity to join Coach Malzahn’s staff at Auburn," Morris said. I’ve known Gus since the early 2000s and consider him a dear friend and someone that helped me get into the profession at the college level."