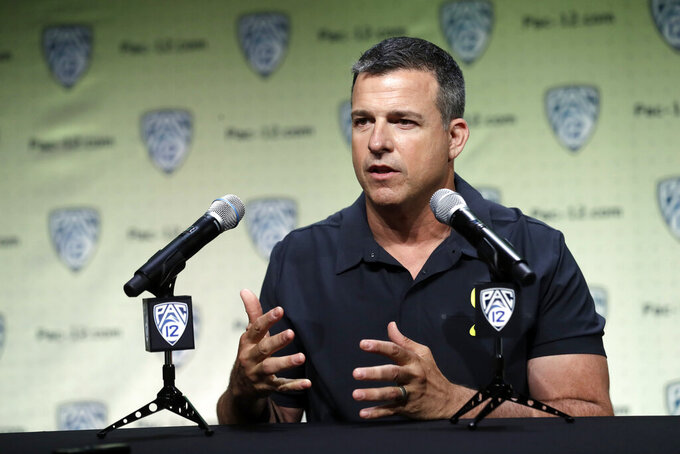 EUGENE, Ore. (AP) — Oregon coach Mario Cristobal figures the Ducks will have 19 days of traditional fall camp before they'll have to start preparing for Auburn.

Oregon's high-profile opener, a rematch of sorts of the 2011 national championship game, is set for Aug. 31 at AT&T Stadium in Arlington, Texas.

"Really, you gotta start preparing for your opponents 10 days out, right? So you're looking at 19 days to figure out your football team," Cristobal said. "You can't pound it out for 19 days either, so you've got to be really careful how you assess and evaluate this thing."

The players seemed just happy to get back on the practice field Friday.

"I would say that we're more focused on the 19 days of fall camp," senior quarterback Justin Herbert said. "We've got a lot to correct and a lot of time before then, and we're going to do our best to get ready and do everything we can to get this team ready for the season."

Oregon was a narrow pick to win the Pac-12 North in the annual preseason media poll after finishing one point ahead of rival Washington. The Ducks also received 11 votes to win the Pac-12 title game. Utah was picked to finish atop the league.

While there was speculation Herbert might leave Oregon early to declare for the NFL draft, he announced his intention to return shortly before the team's bowl victory over Michigan State. Oregon finished 9-4 and Herbert threw for 3,515 yards with 29 touchdowns and just eight interceptions.

He has 63 career TD passes, ranking him fifth among active quarterbacks heading into the 2019 season.

Asked what he thought was an area for improvement, Herbert said "consistency."

"I think at times we played pretty good football last year. The first half of the year we were moving the football really well, then kind of fell off in the later part of the year," he said. "I'd say putting together a full season would be huge."

Herbert will be joined this year by his younger brother Patrick, a tight end who was among nearly a dozen early enrollees for the Ducks who took part in spring practice.

Cristobal had nothing but praise for the younger Herbert, joking that it's a good thing Justin Herbert is a senior or he might be playing in his brother's shadow. He called the freshman from Eugene "extremely smart and a hard worker."

"Expecting great things from Patrick, and we really think he's in the mix to play this year," Cristobal said.

The Herberts aren't the only talented brothers on the team. Senior linebacker Troy Dye, who like Herbert decided to remain at Oregon for his senior year, is joined by younger brother Travis, a running back.

The younger Dye had 739 rushing yards and four touchdowns as a freshman last season, including three 100-yard games in conference play. He partnered with CJ Verdell (1,018 yards, 10 touchdowns) for a formidable Oregon backfield that returns this season.

Newcomers to watch in the fall include defensive end Kayvon Thibodeaux, a five-star recruit from Westlake Village, California, as well as Penn State graduate transfer Juwan Johnson, a 6-foot-4 wide receiver who will help fill the void left by the departure of Dillon Mitchell, a seventh-round draft pick by the Minnesota Vikings. Johnson had 81 catches for 1,123 yards and two touchdowns over three seasons at Penn State.

Oregon also has a new defense under Andy Avalos, who joined the Ducks in the offseason after seven seasons at Boise State. Avalos took over when defensive coordinator Jim Leavitt parted ways with Oregon in February.

Troy Dye seemed a bit incredulous when asked if the defense would be ready for that challenging opener against Auburn. He said that since the spring game the players have been getting together to hammer out the details.

"These 19 days is just for us to polish up what we did and have coach guidance, because we have been in the playbooks, we have been running this defense, we have been doing the right things," Dye said.