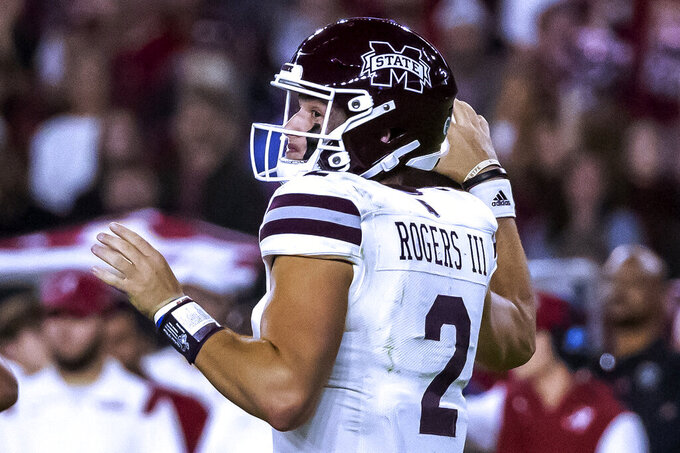 Mississippi State quarterback Will Rogers (2) drops back to pass during the first half of the team's NCAA college football game against Alabama, Saturday, Oct. 22, 2022, in Tuscaloosa, Ala. (AP Photo/Vasha Hunt) 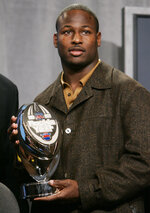 Line: Mississippi State by 12 1/2 according to FanDuel.com Sportsbook.

Auburn has lost five of six and looks to get back on track with interim coach Carnell Williams after Bryan Harsin was fired on Monday. Mississippi State is coming off an open date after dropping its second in a row at No. 6 Alabama.

Mississippi State quarterback Will Rogers vs. Auburn’s pass defense. Rogers tossed six touchdown passes in last year’s record-breaking comeback and has kept on rolling. He remains the SEC leader in passing (319.4 yards per game) and total offense (307.5) and will surpass Dak Prescott (70) for career touchdown passes with his next scoring toss. The Tigers’ pass defense has been a bright spot, ranking fourth in the conference at 193.8 yards per contest. But slowing the fast-paced Air Raid is a tall task, and they will look to Derick Hall and Colby Wooden to provide pressure. Hall has 4.5 sacks and Wooden four to rank seventh and eighth in the SEC.

Auburn: Running back Tank Bigsby, a preseason All-SEC pick, has had an up-and-down season. Maybe he’ll get a boost with his position coach leading the team. Bigsby has produced more than half of his 587 yards rushing against Mercer (147) and Mississippi (179).

Mississippi State: Running back Jo’quavious Marks has caught a pass in 31 consecutive games and is the SEC active leader with 5.65 catches over 31 contests. He currently has 32 receptions for 200 yards.

Williams, 40, will make his head coaching debut after starring at Auburn as a player. ... Former Auburn and NFL lineman Kendall Simmons will guide the offensive line while Will Friend moves over to serve as co-offensive coordinator with receivers coach Ike Hilliard. ... Offensive analyst Joe Bernardi will coach the tight ends. ... The Bulldogs rallied to win last year’s meeting 43-34 with 40 consecutive points, the program’s largest comeback ever. ... Cornerback Emmanuel Forbes leads the SEC with five interceptions and 11 passes defended. He has returned two picks for TDs. ... Dillon Johnson and Caleb Ducking are 9-10 in the SEC with 4.43 and 4.38 catches per game, respectively.