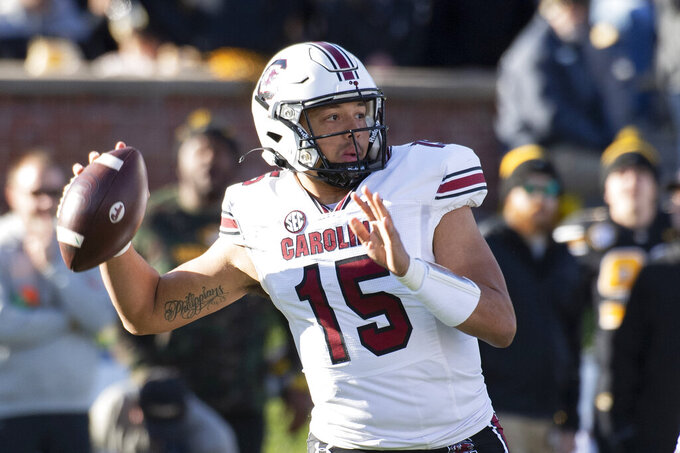 Auburn's chances for a Southeastern Conference title fell apart the last two games. The Tigers will look to bounce back at South Carolina with a new quarterback after Bo Nix's injury.

Nix, Auburn's starter, broke his ankle yet kept playing in a 43-34 loss to Mississippi State after the Tigers were up 28-3.

It wasn't until after that Auburn coach Bryan Harsin found out the significant of the injury. Nix had surgery this week and will miss the rest of the season meaning former LSU quarterback T.J. Finley will get the call when the Tigers (6-4, 3-3 SEC) play at South Carolina (5-5, 2-5) on Saturday night.

Finley came in late a week ago when Nix was limping around. Harsin said he knew that Nix couldn't continue with the Tigers still trying to find a way back into the game.

“At that point, too, can we get a spark, can we make something happen,” Harsin said.

Instead, the one-time SEC West contender lost a second straight to fall out of the championship picture.

Now, it's Finley's turn to get Auburn going. He'll face South Carolina for a second straight year after leading LSU to a 52-24 victory a season ago. Finley threw for two touchdowns and ran for another to put the Gamecocks away.

It will be Finley's first start with the Auburn Tigers. His first start at LSU was that win over South Carolina last season. Finley said he and his family discussed that this week.

“So I’m just going to go out there and do what I did last year and just play consistent and do my job, get the job done,” Finley said.

South Carolina has had its quarterback issues this season with current passer Jason Brown the third to start this season. Gamecocks coach Shane Beamer said the FCS transfer from St. Francis, Pennsylvania, will get his third consecutive start after doing enough good things in a 31-28 loss at Missouri a week ago.

Former South Carolina offensive coordinator and interim head coach Mike Bobo returns as Auburn's OC. Bobo had accepted Beamer's offer to stay on to lead the offense before Harsin's call came and Bobo left. The Gamecocks know to expect what they saw every day in practice — a strong dose of running. “That's all he did when he was here,” Gamecocks defensive lineman Zaach Pickens said. “That's what he does, run the ball.”

South Carolina coach Shane Beamer was asked about any interest he might have at returning to his alma mater, Virginia Tech, as football coach. Beamer, the son of Hokies' great Frank Beamer, said as much affection as he has for the school, his dream job remains South Carolina. “My goal is to bring an SEC championship here to Columbia,” Beamer said. “We’re just at the beginning stages.”

Auburn lately has struggled mightily in the second half. The Tigers have scored nine points halftime in the past three games combined. They were outscored 50-6 in back to back losses to Texas A&M and Mississippi State. “You can’t coast your way through the rest of the game once you come out there and have a great first half," Harsin said.

Auburn is playing at South Carolina for a second straight season. The Gamecocks snapped an eight-game losing streak since their last win in the series in 1933 with a 30-22 win in the pandemic-affected, all-SEC season of 2020. Gamecocks coach Shane Beamer does not believe last year's contest means anything this week, given new coaching staffs on both sides along with new players.