Aztecs finally get a home-field advantage in Mountain West 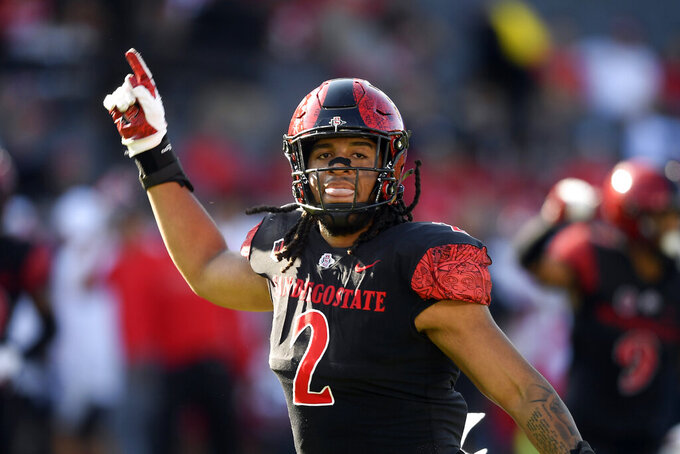 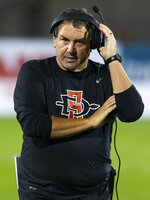 Snapdragon Stadium in Mission Valley opens on Sept. 3 with San Diego State facing Arizona. When the players run onto the field at the 50-yard line of the 35,000-seat stadium with steeply pitched stands, it will be the first time in decades they’ve had their own place to play.

SDSU had always been the second or third tenant behind the Chargers and Padres at the 70,000-seat stadium that used to rise just to the east. As Snapdragon Stadium was being built the last two seasons, the Aztecs bused two hours up the freeway to play their home games at a soccer pitch in suburban Los Angeles.

“It gives us a home-field advantage,” said athletic director John David Wicker, who helmed the construction of the $310 million stadium that is the first phase of a campus expansion. “We’ve never had a home-field advantage before so teams coming into San Diego are going to be at a disadvantage now. It’s also helping from a recruiting standpoint. It’s just going to be phenomenal for our team.”

As for the football, the Aztecs will start the season with plenty of competition in the Mountain West.

SDSU is coming off a school-record 12-2 season and No. 25 finish in the Top 25. It beat Boise State in a thriller to win the West Division but was routed by Utah State in the conference championship game. The Aztecs lost their top weapon, Matt Araiza, to the Buffalo Bills. Nicknamed the “Punt God” for his booming punts that helped SDSU flip the field, Araiza set an NCAA record with a 51.19-yard average, won the Ray Guy Award and was named a first-team AP All-American.

The road to the MWC title could indeed go through the Blue Turf in Boise. The Broncos host San Diego State in a Friday night game on Sept. 30 and then Fresno State on Oct. 8. SDSU will try to avenge one of its losses from last year when it visits Fresno State on Oct. 29.

In top non-conference games, Utah State is at Alabama on Sept. 3 and Fresno State goes for the L.A. double over two seasons when it visits Lincoln Riley’s USC Trojans on Sept. 17. The Bulldogs beat UCLA 40-37 last year at the Rose Bowl.

In a rare intra-conference coaching jump, Jay Norvell left Nevada, where he was 33-26 in five seasons, for struggling Colorado State, which gave him a $9 million, five-year deal. A number of Wolf Pack players followed him to Fort Collins, which will make for a lively game when the Rams visit Nevada on Oct. 8.

This will be the last season of the Mountain and West divisions. The MWC will use a new schedule rotation in 2023 designed to match the two best teams in the conference championship game and have a better shot at a New Year’s Six/College Football Playoff berth.

Snapdragon is a division of local tech company Qualcomm, which had a 20-year naming rights deal at the old stadium.

The new venue ncludes touches of the old one, including the statue of Jack Murphy and his dog, Abe of Spoon River, that stood outside the old stadium that used to bear his name, and concrete chunks used as pavers in a plaza in front of one of the many local craft beer stands. There’s a display featuring the seats used by late super fan Tom Ables, who attended 788 Aztecs games, home and away, during seven decades.

The stadium is a remarkable accomplishment in a city where getting major projects built is difficult, as evidenced by the 15-year tussle with the Chargers over a new stadium that led the team to move to Los Angeles.

“We were transparent. We worked with everyone,” Wicker said. “We literally went out and talked to everyone as we looked at a master plan for the whole site, for the stadium, and asked people’s opinion and made sure we incorporated as much as we could into it and we just kept our head down and we worked hard.”