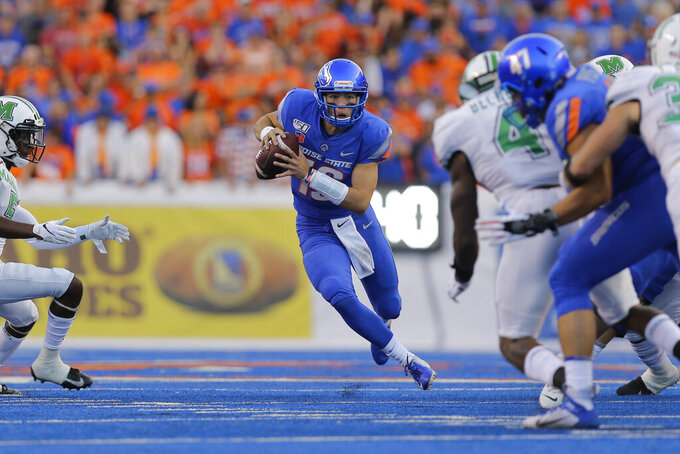 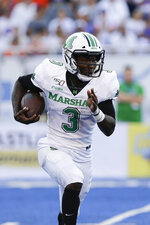 BOISE, Idaho (AP) — Hank Bachmeier threw for 282 yards and a touchdown and No. 24 Boise State held its second straight opponent scoreless in the second half to grind out a 14-7 victory over Marshall on Friday night.

Boise State won despite the lack of explosive offense shown in its opener last week in a 36-31 victory at Florida State. The Broncos snapped Marshall's streak of 19 victories when the Thundering Herd score first,

The Broncos' running game came to life in the second half after starting running back Robert Mahone left in the first half with an apparent right shoulder injury. George Holani finished with 103 yards on 22 carries, the first running back to eclipse the 100-yard mark against Marshall since Southern Miss's Ito Smith had 150 on Nov. 25, 2017.

In his second start as a true freshman, Bachmeier was 22 of 34 with an interception and a rushing touchdown.

Brenden Knox rushed for 71 yards on 10 carries to lead the Thundering Herd (1-1). They finished with 172 total yards.

Marshall: While the Thundering Herd had their streak of 15 games without a 100-yard rusher snapped, the secondary needs the most immediate attention. Marshall allowed five pass plays of 20 yards or more, igniting Boise State's first two scoring drives.

Boise State: After last week's opener, one area of emphasis for the offensive line was getting better protection for its quarterback. The Broncos still have work to do there as Bachmeier was under duress all night long and was strip-sacked once, resulting in a takeaway for Marshall.