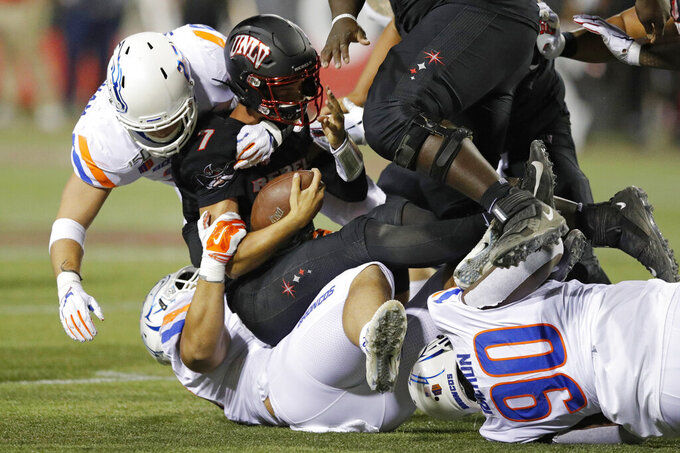 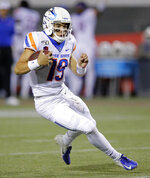 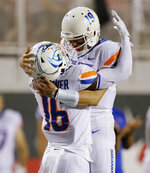 LAS VEGAS (AP) — Boise State was looking for a fast start against UNLV, especially coming off a bye week.

And, while second-half defense had been the key to the No. 16 Broncos' previous four wins, their first-half defensive work was near perfect Saturday.

Hank Bachmeier threw for 299 yards and two touchdowns and Boise State rode a strong defensive effort to a 38-13 win over UNLV.

"The whole mindset coming off the bye was how are we going to start fast," said Boise State coach Bryan Harsin, whose team led 17-0 at halftime. "What's our mindset Friday, Saturday night, our guys came ready to play. It was a really solid defensive performance."

Khalil Shaker caught seven passes for 111 yards and a TD, John Hightower had four catches for 105 yards, including a 76-yard touchdown reception that make it 14-0 with 13:38 left until halftime.

"They just called the play and I went on the go route," Hightower said. "As I play my part, as they come up, as they call my play. I just do what I can."

Shaker's touchdown came on a pass from backup Chase Cord, a 24-yard hookup with 5:31 left in the game.

Bachmeier opened the scoring with 11:33 left in the first quarter, finding Garrett Collingham on the right side for a 2-yard scamper through a tackler.

Boise State added in a 52-yard field goal from Joel Velazquez to make it 17-0 on the final play of the first half. A Bachmeier-to-Shakir pass that covered 26 yards set up the field goal.

The Broncos increased their lead to 24-0 with 6:40 left in the third as Akilian Butler, on a reverse, scored on a 23-yard run around the right side.

UNLV's Kenyon Oblad, a redshirt freshman quarterback, made his first career start in place of Armani Rogers, who sprained a knee in last week's 53-17 loss at Wyoming.

"There's going to be a game where you will see both of them," UNLV coach Tony Sanchez said. "As the game went on, we did some good things. We didn't get pushed around tonight."

Defensively, Curtis Weaver, a junior, is now the Mountain West Conference all-time sack leader. On Saturday, he had three sacks to take the lead, and has 29.5 in his career. The Broncos had five sacks overall.

"It's a blessing. I thank God every day, I thank our support system, my mom, my family," Weaver said who had many of his family in attendance. "We just kept attacking. They showed some looks."

Boise State has now given up 22 second-half points this season. After not allowing a point after halftime in their first three wins, the Broncos gave up nine in their win against Air Force in Boise 15 days earlier. On Saturday, Boise State was whistled for 130 yards of penalties.

"Our execution could have been better, penalties, not finishing at the end," Harsin said. "We'll address those. It's about where we're trying to go. Overall, big positives tonight on special teams, especially with Joel hitting a 52-yard (field goal)."

SO LONG ... HOME AWAY FROM HOME

The Broncos will miss Sam Boyd Stadium, which is in its final year due to the Rebels moving their home games to now being built Allegiant Stadium, the new home of the soon-to-be NFL's Las Vegas Raiders.

Since earning a berth in the Las Vegas Bowl in 2010, the Broncos are 7-0 at Sam Boyd. Boise is 3-0 against UNLV, and has defeated four different Pac-12 opponents in Las Vegas Bowls.

Boise State fans made up at least half the announced crowd of 24,681. It was UNLV's largest home crowd since 2015, against UCLA.

"We've got a great fanbase," Hightower said. "With all of them behind, it felt like a home game."

The Broncos are now 8-3 all-time against the Rebels.

UNLV travels to Vanderbilt on Saturday.