Back to normal not good enough for Boston College, Hafley 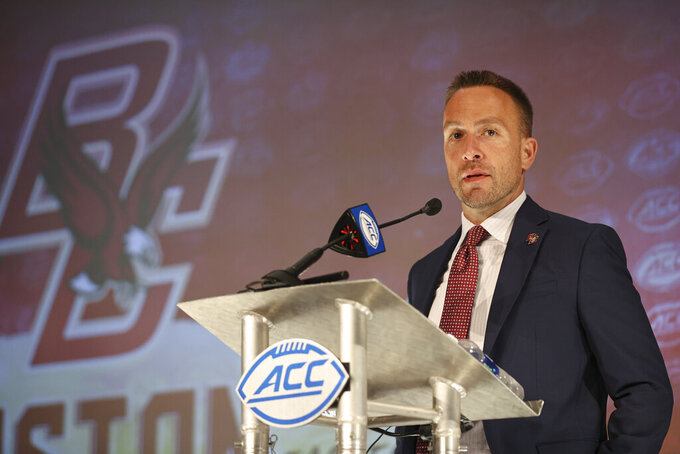 FILE - Boston College head coach Jeff Hafley answers a question during an NCAA college football news conference at the Atlantic Coast Conference media days in Charlotte, N.C., in this Thursday, July 22, 2021, file photo. After taking over at Boston College just before the pandemic broke out, Hafley isn’t looking for things to get back to normal. (AP Photo/Nell Redmond, File)

BOSTON (AP) — After spending his first year at Boston College coaching in a pandemic, Jeff Hafley isn’t looking for things to get back to normal.

Normal for the Eagles — at least under predecessor Steve Addazio — has meant seven wins and a .500 record (at best) in the Atlantic Coast Conference. Hafley went 6-5 (5-5 ACC) in his first year in Chestnut Hill, including a four-point loss to No. 12 North Carolina and a six-point loss to top-ranked Clemson in which BC led by 18 just before halftime.

Heading into Year 2, the expectations are high, with the Eagles picked to finish third in the Atlantic Division in the preseason ACC poll.

“I’m glad people were talking about us,” Hafley said. “We need to play better than we did last year and that’s how we’re always going to approach things. But I appreciate people being excited, and I’m grateful for that.”

In addition to having a second year under Hafley — and a first with something resembling a regular spring and summer — the Eagles return 20 starters from last season. Among them: quarterback Phil Jurkovec, receivers Kobay White and Zay Flowers, cornerback Josh DeBerry and offensive linemen Alec Lindstrom and Ben Petrula.

After years of struggling to find consistency at quarterback, Hafley landed Jurkovec as a transfer from Notre Dame. The Pennsylvania prep phenom earned an immediate eligibility waiver and threw for 2,558 yards — the most ever for a BC quarterback in his first 10 starts.

Jurkovec's four 300-yard games in his first five starts were the most for the Eagles since Matt Ryan in 2007.

“The guy hadn’t played since his senior year in high school. He comes to a new team ... really without a spring ball, training camp was kind of every other day,” Hafley said. “Does he know the offense well enough to do it in his sleep? Probably not. He goes out and plays the way he did. That’s why I’m so excited about him: how hard he works, the leadership, the confidence.”

The school that has sent a steady stream of offensive lineman to the NFL has another strong group to protect Jurkovec and set up the running game.

“The O-line, they’re kind of like a cult on the team the way they stick together,” Jurkovec said. “They’re so tight. You can tell they care so much about each other. It’s a little different position than anywhere else because of how you have to work together.”

Jurkovec has plenty of people to throw to.

Flowers caught 56 passes for 892 yards and nine touchdowns and was just the second wideout in school history to land on the All-ACC first team. CJ Lewis averaged 16.4 yards per catch to lead the team. White returns after missing last season with a knee injury.

“I know everybody’s going to want to ball,” Jurkovec said. “But it’s going to be fun just to see the different personnel groupings we can go with, just all the different options that we have.”

The biggest losses are at linebacker, where the Eagles' top two tacklers moved on to the NFL: Isaiah McDuffie (107 tackles, Packers) and Max Richardson (99, Raiders).

Hafley said the team could have more depth at the position this year, with Vinny DePalma coming back from an injury, Isaiah Graham-Mobley joining the team as a transfer from Temple, and Kam Arnold moving up from strong safety.

“There’s really good competition in there right now,” Hafley said. “We've got some young guys mixing in there. It’s a really good, smart group of guys."

The Eagles ease into the season with games against Colgate, UMass and Temple before playing Missouri of the Southeastern Conference and then visiting preseason No. 3 Clemson. With no game against No. 9 Notre Dame or No. 10 North Carolina -- who were on the schedule last year -- or Miami, the Eagles face just one team in the AP’s preseason Top 25.