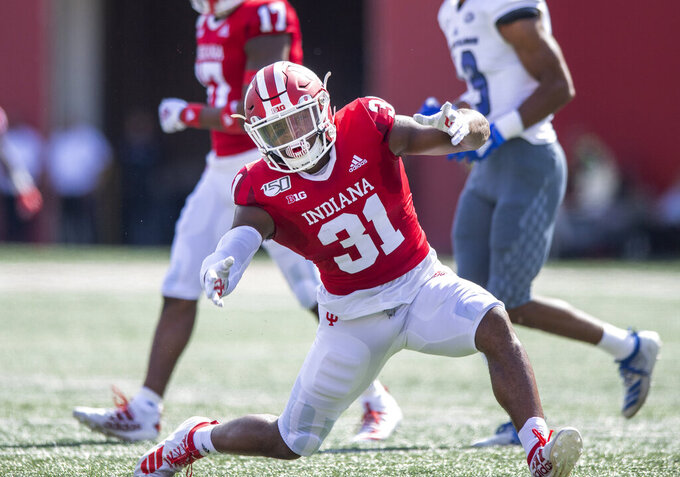 In this photo taken on Saturday, Sept. 7, 2019, Indiana defensive back Bryant Fitzgerald (31) reacts after sacking Eastern Illinois quarterback Johnathan Brantley (11) during an NCAA college football game in Bloomington, Ind. The Hoosiers could be headed to a second straight bowl game despite a brutal schedule that begins with Penn State visiting Bloomington, Indiana, on Oct. 24.(AP Photo/Doug McSchooler)

He wanted to see the playmaking safety-linebacker take on a more prominent role as a pass rusher while continuing to use his big body to reroute receivers and help in run support.

“I think you’ll see multiple individuals used to equal what Marcelino was able to do," Allen said Monday. “I think it’s going to be a collective group effort to replace the things he’s been able to do."

There's nothing easy about replacing an experienced defensive play-maker with NFL aspirations like his two older brothers, Marcus and Reggie Jr.

At 6-feet, 220 pounds, Ball possesses the size and speed combination college coaches crave. He was productive on the field and respected off of it, so much so that Ball's teammates recently elected him one of five team captains even though he won't play a down this season.

But the hardest part of replacing Ball is knowing that as they gear up for Saturday's season opener against No. 8 Penn State, Ball will undergo surgery this week.

“He's handled this tough situation with so much maturity," Allen said. “He's helping the the guys at his position and coaching those guys up.”

He arrived in Bloomington after The Indianapolis Star named him the state's best prep defensive back in 2016. The former high school star from suburban Indianapolis didn't disappoint. After redshirting in 2017, he led the team with three interceptions, two forced fumbles and six takeaways in 2018.

“I think there are certain things we'll ask Fitz to do," defensive coordinator Kane Wommack said. “I think he’s playing some really good football right now. When you have a dynamic guy like ‘Lino, you've got to be ready to adjust from a leveraging standpoint, a schematic standpoint as well as a personnel standpoint."

That means adding some extra bodies to the mix.

Jamar Johnson, a productive junior from Florida, is listed as Fitzgerald's backup . Johnson played in 10 games as a true freshman and last season finished with 25 tackles, two interceptions to share the team lead and three sacks, tied for third at Indiana.

Bryson Bonds is another name to watch. At 6-1, 200 pounds, the true freshman who twice earned all-state honors in Texas already has impressed the coaches in the abbreviated, odd lead up to Saturday's game and they're thrilled about his potential.

“He was certainly a godsend from a depth perspective," Wommack said. “He’s so locked in and so clean with his style of play. His footwork is in the right place, his eyes are in the right place, so he’s getting better and better anticipating where to be in our defense. I didn’t think he’d be to this level at this point, but he’s done a phenomenal job."

And without Ball, the Hoosiers may need at least those three to help fill the void.

“I think time will tell what that’s going to look like on the field," Allen said. “Marcelino is a unique talent and there’s a reason he’s been a very effective force for us. In some ways, it’s going to give other guys more opportunities."