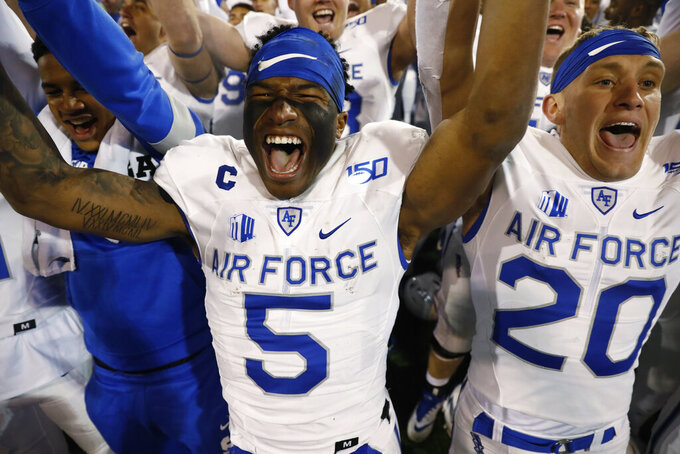 AIR FORCE ACADEMY, Colo. (AP) — The Army Black Knights stare at the trophy residing in their locker room each day.

It's a reminder of what they did accomplish — and what still can be accomplished.

Sure, the Black Knights (3-5) are mired in a four-game skid. And sure, they're banged up (especially at quarterback). But their sights are firmly set on retaining that coveted Commander-in-Chief's Trophy, which goes annually to the service academy with the best record in the round-robin competition.

The Black Knights take their first step toward keeping the prize in their possession when they travel to Air Force (6-2) on Saturday. Army has won the trophy two straight seasons — the first time in program history that's happened.

"Regardless of how this season's gone so far, this is such a different game, such a special game for us," Army senior linebacker and captain Cole Christiansen said. "We say this every year: It doesn't really matter what record you went into it (with). It's two action football teams going downhill, face-to-face, head-to-head. We're excited."

The Falcons can't capture the trophy after losing at Navy 34-25 on Oct. 5. All they can do is play the role of spoiler.

"It's a buzz kill we lost the first leg of it," Falcons senior fullback Taven Birdow said. "But it's still Army."

There's wiggle room for the Black Knights should they lose at Air Force. If they beat Navy on Dec. 14, they would retain the prize since all three service academies would split the competition.

Not that the Black Knights are thinking along those lines. They're not dwelling on that skid, either, or the injuries, which include quarterback Kelvin Hopkins Jr. and backup Jabari Laws (both were knocked out of last weekend's loss to San Jose State).

It's only about Air Force.

"We're very fortunate to be in a three-team, round-robin where you play for a very prestigious award like the Commander-in-Chief's Trophy and have the opportunity to go to the White House and accept the trophy," Army coach Jeff Monken said. "Everybody gets fired up. They're great rivalries and I'm sure that both teams in this game are going to be excited to play."

No matter how cold it might be Saturday (forecasts are calling for high 40s), don't stand too close to the sideline heaters. It's a lesson Air Force coach Troy Calhoun learned in a game against Army in 1985. He was summoned into the game on a snowy day and tried to quickly warm his feet by the heater.

Instead, he melted the plastic on one of his screw-in cleats.

The Black Knights allowed five sacks last week in a 34-29 home loss to San Jose State. They've now surrendered 10 for the season. Army led the nation a year ago in fewest sacks allowed with three.

Army is looking for even more production out of the fullback. In 2018, senior Darnell Woolfolk ran for 956 yards and 14 TDs, Andy Davidson had 330 yards and two scores, and Connor Slomka contributed 324 with five TDs. So far through his senior season, Slomka has 452 yards and three TDs, while newcomer Sandon McCoy has 324 with five scores. Slomka and McCoy produced 66 yards in 25 tries against San Jose State.

The Black Knights haven't lost four in a row since 2015 when the team closed out the season dropping five straight.

"You're not going to have a great smile on your face or a calm pleasant demeanor when you're on a four-game losing streak," Monken said. "There's going to be some anguish because guys care. They're invested. The coaches are invested. I feel the same way. We're not satisfied at all and we want to win."

The Falcons have captured 20 outright Commander-in-Chief's Trophies, while Navy is at 15 and Army seven. ... Army has won two straight in the series. Before that, Air Force won 18 of 20. ... Air Force's defense is allowing 92.8 yards rushing a game. Army is 0-13 under Monken when rushing for less than 200 yards. The Black Knights average 263.5 on the ground this season. ... The Falcons are 21-4 at home against Army.