Baylor better going to UTSA year after loss to Roadrunners 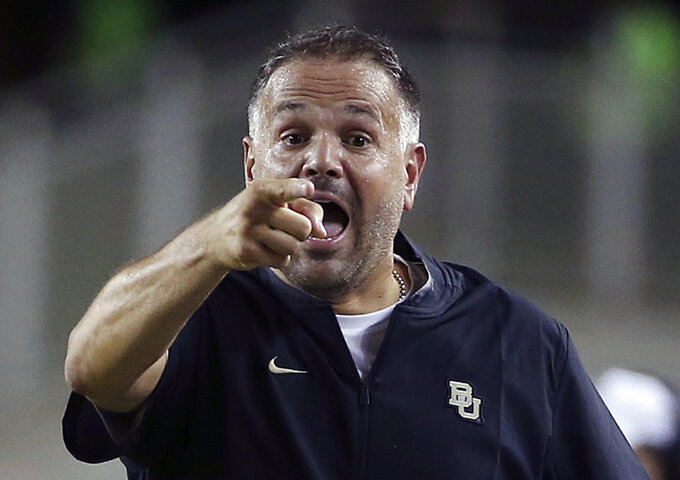 FILE - In this Sept. 1, 2018, file photo, Baylor coach Matt Rhule gestures to an official during the first half of an NCAA college football game against Abilene Christian, in Waco, Texas. Rhule quickly made one thing clear about what happened early last season in a home loss to UTSA. “They were the tougher team last year, they were the tougher coaching staff last year, and they came in here and they were physical,” Rhule said this week. Baylor (1-0) has already reversed the trend. (Jerry Larson/Waco Tribune Herald via AP, File)

SAN ANTONIO (AP) — Baylor coach Matt Rhule wanted to make one thing clear about what happened early last season in a home loss to UTSA.
"They were the tougher team last year, they were the tougher coaching staff last year, and they came in here and they were physical," Rhule said this week. "They straight-up beat us. They didn't trick us, they beat us. We worked hard all year to try to become a tougher team."
This time, the Big 12 Bears have to play UTSA on its home turf in the Alamodome on Saturday night.
The Roadrunners had never beaten a Power Five team before their 17-10 win in Waco in the second game last season. That came after Baylor had lost its home opener to Liberty, another team that got its first win over a team from one of the major conferences.
Baylor (1-0) has already reversed the trend a bit this year in Rhule's second season, piling up 606 total yards with two quarterbacks successfully sharing snaps and also having two 100-yard rushers in a 55-27 season-opening win over Abilene Christian. They have already matched their win total from last season.
"They're a much-improved football team," UTSA coach Frank Wilson said. "You look at them in the back end of their season a year ago when they played Texas and Duke and those people, they were much improved even then. A talented team that continues to improve."

UTSA (0-1) lost its opener 49-7 at Arizona State with 13 first-time starters (eight on offense, five on defense), and 15 freshman getting into the game. The Roadrunners had only 220 total yards — 218 of that passing.
"We're such a work in progress," Wilson said. "We did a lot of things incorrectly that need to be rectified in order for us to continue or to have promise in this season. ... There's no alarm bells going off, there's no panic, but we need to fix those things that we did not do well a week ago."
TWO TAKING SNAPS
Returning sophomore starter Charlie Brewer (8 of 15 for 138 yards with an interception) and graduate transfer Jalan McClendon (10 of 13 for 173 yards and two TDs) both played quarterback for Baylor in the opener.
"We tried to play two series on, two series off," Rhule said. That only changed when Brewer got banged up in the second half when he was hit on an option play and had his back checked.
Rhule said Brewer is fine.
"We were pleased with the way both quarterbacks played," Rhule said. "I'd expect us to continue to do that."
BACK TO THE ALAMO
The Bears play in the Alamodome for the first time since the 2011 Alamo Bowl, when Heisman Trophy-winning quarterback Robert Griffin III helped lead them to a 67-56 win over Washington .
HURT TACKLE
Baylor senior left tackle Josh Malin suffered an MCL injury in the opener when his left knee got rolled on at the end of the second play. Rhule said the best-case scenario would be Malin being able to return in about a month.
PLAYING THE BIG BOYS
UTSA is one of only two non-Power Five teams (the other is BYU) to open the season with three consecutive games against teams from one of the Power Five leagues. After playing at Pac-12 Arizona State and their home opener against Baylor, the Roadrunners play another Big 12 team when they go to Kansas State.
DEFEND THE DOME
UTSA is donating more than 15,000 tickets for San Antonio active-duty and veteran military members and their immediate family members as part of an effort known as Operation Defend The Dome. The UTSA athletic department donated the same number of tickets that were sold before Friday.