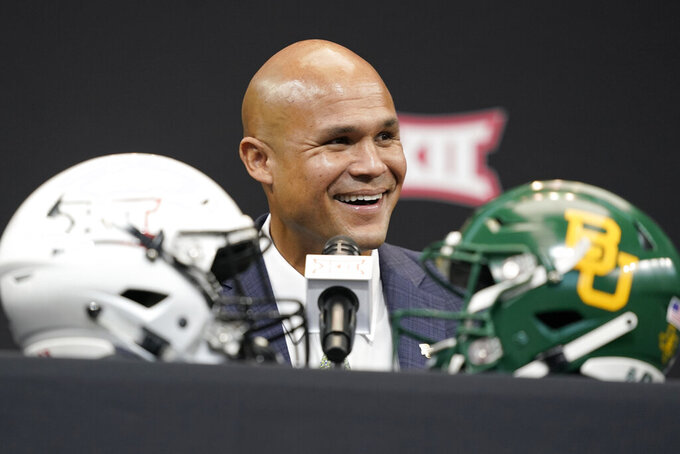 ARLINGTON, Texas (AP) — Baylor coach Dave Aranda and Oklahoma State's Mike Gundy sat just a few yards from the end zone where the Big 12 title was decided in their championship game seven months earlier, on a dazzling tackle at the pylon by the Bears.

From a stage surrounded by empty stands, with the only noise coming from the hum of air conditioners inside cavernous AT&T Stadium, Aranda remembered the chaos of that moment. Gundy spoke later, saying the painful memory sometimes hits him when he wakes up in the middle of the night.

Now both are in charge of teams among the top three in this year's preseason poll, and were clear about moving on while addressing the couple of hundred people on the field in front of them at Big 12 media days Wednesday.

“I think it goes back to just the task within a task,” Aranda said. “So to keep your eyes on that and to focus on what’s real, because I think this is way cool with the lights and all the people, and being asked questions can feel cool. But I think that’s really not real. What’s real is what’s happening day-to-day in your locker room, in your weight room, in your cafeteria.”

Baylor is the preseason favorite to repeat as Big 12 champ a year after entering the season eighth on that 10-team list. The Bears' 21-16 victory at the home of the Dallas Cowboys was preserved when safety Jairon McVea knocked Dezmon Jackson out of bounds inches short of the goal line on fourth down with 24 seconds left.

The Cowboys had the better chance to qualify for the College Football Playoff, and the loss ended those hopes. Senior quarterback Spencer Sanders will play a big role in trying to get Oklahoma State in position again.

“You kind carry a chip on your shoulder for motivation, but you have no regrets, can’t hold yourself to that,” Sanders said. “You’ve got to let it go and move on. There’s nothing we can do about it now. I’m glad that we could respond in the right way.”

The Cowboys did that by rallying in the second half for a 37-35 victory over Notre Dame in the Fiesta Bowl. Baylor set a school record with 12 wins — matching Oklahoma State's total — by beating Mississippi 21-7 in the Sugar Bowl.

With Oklahoma's 47-32 victory over Oregon in the Alamo Bowl, the Big 12 had three teams with at least 11 wins for the first time since 2008. And those are the top three teams in the preseason poll, OU a spot ahead of its Oklahoma rival with Texas voted fourth.

The Bears got the preseason nod despite deciding to change quarterbacks in the spring. Blake Shapen was named the starter over incumbent Gerry Bohanon, who transferred to South Florida.

“I think people expect us to walk out there and win 12 games or whatever, but it’s a blank slate,” linebacker Dillon Doyle said. “It’s a clean canvas, and we have to go beat Albany on whatever date we play that game (Sept. 3).”

Baylor's expectations start with a defense that finished second overall in the Big 12 — behind Oklahoma State, which belied its offense-first reputation under Gundy, the former quarterback entering his 18th season at his alma mater.

Gundy, the dean of Big 12 coaches by far, was quick to mention the departure of linebackers Malcolm Rodriguez and Devin Harper, who combined for 25 tackles for loss on the team that led the country with 4.1 sacks per game (57 total).

“We’ve got guys that have to replace them,” Gundy said. “We like where they’re at. They just haven’t played in big games. We don’t know much about them. We have the same situation at corner. They’ve played some but haven’t been out there in big games.”

Still, it's not anything new for Gundy, who has 16 consecutive winning seasons and is coming off his seventh with double-digit victories.

“We don't really get out of our box much at Oklahoma State,” Gundy said. “We believe in being mentally and physically tough across the board. We try to put our players in situations that game days are like anything they've already been through in practice.”

The Cowboys will be motivated by what they went through in the Big 12 title game last year.