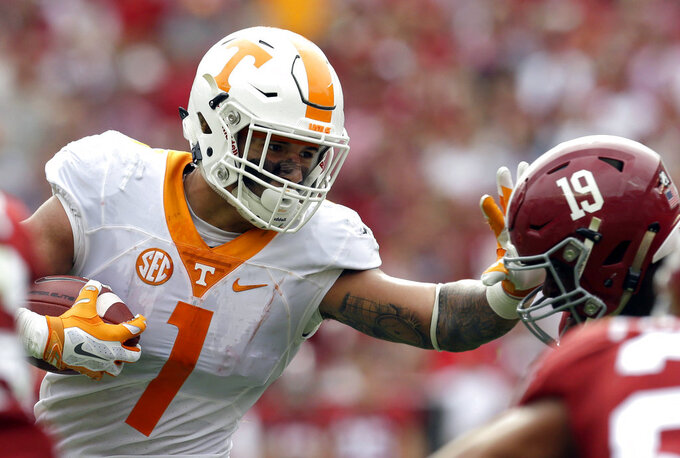 FILE - In this Oct. 23, 2015, file photo, Tennessee running back Jalen Hurd (1) stiff-arms Alabama linebacker Reggie Ragland (19) during the first quarter of an NCAA college football game in Tuscaloosa, Ala. Hurd made a thoughtful decision to become a receiver for one season at Baylor after being one of the top running backs in the SEC. Hurd’s transfer from Tennessee and transition to primarily catching the ball instead of carrying it has worked out with the Bears after going more than a year without playing a game. (AP Photo/Butch Dill, File)

WACO, Texas (AP) — Jalen Hurd made the decision to become a receiver for one season at Baylor after being one of the top running backs in the SEC.

After going about 21 months without playing a game, Hurd's transfer from Tennessee and transition to primarily catching the ball instead of carrying it seem to be working out with the Bears.

"It's been a grind. It's always been hard having to wait and then sit out," Hurd said. "But it was good to rest my body and everything like that. I think it's been a good season."

The 6-foot-4, 217-pound Hurd — down about 20 pounds from his days as a bruising between-tackles running back — is fourth in the Big 12 with 6.2 catches per game for Baylor (5-5), which can get bowl eligible with a win in its home finale Saturday against TCU. Of his team-leading 62 catches, 46 have gone for first downs. He has 837 yards receiving (13.5 per catch) and four TDs.

When Hurd decided to leave the Volunteers after their eighth game of his junior season in 2016, he was their top ball carrier and only 440 yards away from Travis Henry's school record of 3,078 career rushing yards. He had eight carries for 16 yards in his final game against South Carolina, and then-Tennessee coach Butch Jones said afterward that an injury kept him out after halftime.

About a week later, Hurd tweeted that he had a concussion among "multiple injuries" that season and had been thinking about transferring for "quite some time."

The Tennessee native also wrote then that he knew the Vols' read-option offense might not be the best fit for him, but he wanted to be "part of a beloved program." He also wanted an offense that highlighted his ability to run while showcasing his ability to catch the ball.

When he got to Baylor, Hurd had sit out last season because of the transfer. But even without being able to play in a game, it was a busy year making the transition to receiver while also being on the scout team in practice.

"Obviously coming to practice, doing scout team and everything, still I was working hard and putting my head down and grinding just like I was in season just because I was learning a new position," he said after a recent Bears practice. "I'm thankful that I'm healthy and everything like that. And I didn't do anything stupid in my year off, so that was good."

Coach Matt Rhule said Hurd loves to practice and last year made a real impact on the scout team when often playing the part of the opposing team's top player.

"A lot of people love the games and love the publicity, but he loves to practice," Rhule said.

Baylor initially this season used Hurd only as a receiver — he has at least three catches in every game, and had back-to-back 100-yard games. But since a single carry in the third game, he has had multiple rushing plays in each game — and ran for TDs in three consecutive games .

"He's a real security blanket out there. It seems every time we need something, he's in the backfield or he's going to get targeted," senior right guard Blake Blackmar said. "Love seeing that guy get the ball and break tackles and stuff. We love having him in the backfield when we're running power right on third and short. It's a real confidence boost. He'll hit the hole hard."

The running receiver is now among the national leaders with 47 total plays gaining at least 10 yards this season. Among active FBS players, he is 10th with 4,185 career all-purpose yards and 13th with 33 touchdowns — 26 (20 rushing, six receiving) at Tennessee and seven for Baylor.

Rhule said Hurd is willing to do whatever it takes to win, whether block, run or catch the ball. The coach described him as an example to young players about how versatility can be an asset.

"He's one of the most versatile players around, and because he's played tailback his whole life, those things come very naturally to him," Rhule said. "He spent a lot of time learning, route running, catching balls off the Jugs (machine), really developing as a receiver. But at the same time, we can stick him in there, really in any run concept and he just has such a natural feel for how to run the football."