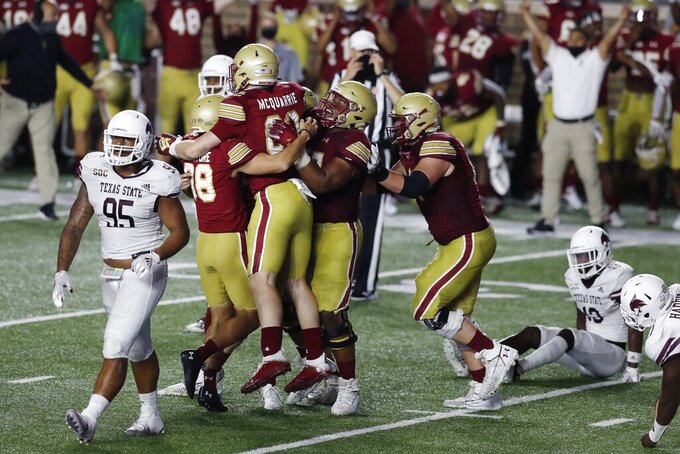 BOSTON (AP) — Boston College coach Jeff Hafley told his team all week to expect the game against Texas State to come down to the wire.

For some reason, they believed him.

Trailing 21-7 to the three touchdown underdog, Boston College scored 17 straight points to beat the Bobcats on Saturday night, tying it up with 1:11 left and then taking its only lead of the game on Aaron Boumerhi's 36-yard field goal with 3 seconds to play.

“We didn’t take them for granted,” Hafley said after winning his Chestnut Hill debut in an empty Alumni Stadium. "I told the team we were going to win it in the fourth. That’s how we’re going to play. I respected our opponent, and we went out and did that.”

One year after losing to Kansas, also a 21-point underdog, BC (2-0) again seemed headed for another embarrassing loss when Phil Jurkovec was forced to throw the ball away on third down from the Texas State 16.

But a late hit out of bounds gave the Eagles a first down, and two plays later Jurkovec hit Hunter Long from 5 yards out to tie it.

“I looked at (Jurkovec) at the end, on those two drives, and said, ‘This is what we’ve talked about. Go play ball, man. Just let it rip,’" Hafley said. "And he did.”

BC's defense forced a three-and-out that used up only 15 seconds, and the Eagles got the ball back on their own 33 with 47 seconds left. Jurkovec completed five straight passes to move BC to the 19; the Bobcats (1-3) called all three of their timeouts to try to get into Boumerhi's head.

“That was something else. It’s very rare there are three timeouts left at that point in the game,” said Boumerhi, who had a kick blocked in the first quarter. “I was kind of expecting it. What else are they going to do with them?”

A Notre Dame transfer, Jurkovec completed 26 of 38 passes for 210 yards, with one touchdown and one interception; he also ran in BC's first two scores, from 2 and 3 yards out. Long caught nine passes for 81 yards for the Eagles, who entered the game as a 21.5-point favorite.

Brady McBride threw for 229 yards, connecting with Marcell Barbee for two touchdowns as the Bobcats never trailed until the final field goal. McBride started the season-opening loss to SMU but then sat out the next two games because of COVID-19 protocols.

Texas State punted on its last four possessions, and its last two were its only three-and-outs of the game.

There were no fans at Alumni Stadium to see Jurkovec and Hafley make their Chestnut Hill debuts. A few rows of cutouts were placed in the end zones, noise was piped in, and the public address announcer called off the plays as usual.

With about a minute left in the first half, BC defensive back Josh DeBerry stepped in front of the receiver but dropped a potential interception. McBride completed the next three passes, including a 6-yard scoring throw to Barbee to make it 14-7.

Texas State: The Bobcats have never beaten a team from a Power 5 conference since moving up to the FBS in 2012. The Sun Belt Conference school last beat a team from a top league in 1986, when it beat Rice 31-6 while the Owls were in the Southwest Conference.

Boston College: Last year's loss to Kansas was the Jayhawks' first over a Power 5 school in more than a decade. That was under coach Steve Addazio, who was fired and replaced by former Ohio State assistant Jeff Hafley.