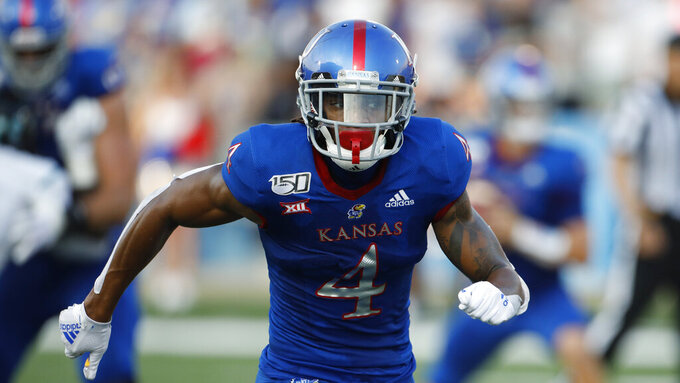 The first memories that popped into Steve Addazio's mind when he asked about Les Miles was from their days together in the SEC, when he was an assistant at Florida and Miles the head man at LSU.

"He always had the fake on the field goal," said Addazio, now Boston College's head coach. "One year the ball got mishandled. I'll never forget it, watching on the sideline, and it was on the ground. When it hit the ground it could have gone this way or this way, and of course it rolled — like, they got a first down like that. But he's always got some trickeration in his bag."

It's that trickeration — the perfect made-up word for Miles, mind you — that in part made Addazio so happy to see his old coaching crony come out of a brief hiatus to rebuild lowly Kansas.

"He makes college football fun in a lot of ways," said Addazio, whose team faces the Jayhawks on Friday night in Chestnut Hill. "Not just with that but just with personality and everything else. He's been in a lot of big-time ballgames, and certainly one of the great coaches in our game."

It's hard to say whether Miles is having much fun this week. The Jayhawks lost a nail-biter at home to Coastal Carolina last weekend. But one thing is certain: It might take one of the great coaches in college football to build Kansas into anything resembling a winner.

For his part, Miles insisted this week that he knew what he was getting into when he replaced the fired David Beaty after last season. The Jayhawks have churned through coaches, struggled to win games and languished so far in the Big 12 basement that they've been a national laughingstock.

The goal is ultimately to do what Addazio has done, slowly build a consistently winning program. The Eagles have been to five bowl games the past six seasons.

"We're not there yet," Miles said. "Not that we won't be able to do the things we want to do, but we just haven't gotten there yet. We're going to continue to improve."

Unlike under previous Kansas coaches, from Turner Gill to Charlie Weis, there is reason to believe Miles can accomplish that much. He took Oklahoma State from doormat to winner, and he had the Tigers competing for SEC superiority back in the days when Addazio was at Florida.

"He gets his teams ready to play," Addazio said. "I always felt like, when you played LSU, they were ready to roll. They had some great players, super talented players. He's got personality with it."

There is no question Boston College (2-0) has the talent advantage when the Jayhawks (1-1) visit Friday night, but Miles knows he could jumpstart his rebuild with a bounce-back win on the road.

Boston College has allowed gobs of yards through the first two games, including 377 rushing to Virginia Tech and Richmond. But while Addazio called it "a concern," he should feel good about the fact that Kansas only managed 280 yards of total offense against the Chanticleers.

"We've kind of bent but we haven't broken," Addazio said. "I think scores are what scare me."

Jayhawks quarterback Carter Stanley was 13 of 19 for 107 yards and two interceptions last week, leading to speculation he would be replaced by transfer Thomas MacVittie. Not so fast.

"He was guilty of trying to make plays, OK? And it's the right thing," Miles said. "He's a guy that's accountable. I think he'll step in and with opportunity play well. I'm not going to make a change at this time."

Eagles linebacker Isaiah McDuffie, who is coming back from offseason knee surgery, is unlikely to play this weekend. But he might not be far off. "He's really improving all the time," Addazio said. "I kind of just go through each week. We're not going to rush anybody."

Boston College is led by two of the biggest running backs in the country in 6-foot, 250-pound AJ Dillon and 6-1, 240-pound David Bailey. How do you stop them?

"Well, we've got to get numbers to the ball and make sure we match their intensity," Miles said, "and play physical football ourselves."

Neither coach had a problem playing Friday night, even though the short week forced them into a condensed preparation.

"You can't spin your wheels on Sunday, for example," Addazio said. "We don't want to short change (last week's) win, but you can't spend all day on that win."

Or in the case of the Jayhawks, dwell on a loss. "We like the schedule," Miles said. "We feel good about it."