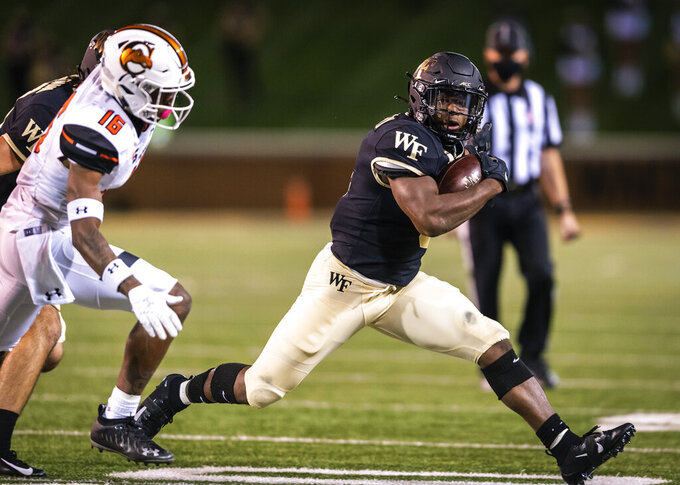 WINSTON-SALEM, N.C. (AP) — Christian Beal-Smith ran for three touchdowns and Donavon Greene returned a kickoff 96 yards for a touchdown as Wake Forest won for the first time this season by defeating Campbell 66-14 on Friday night.

Beal-Smith scored from 2 and 10 yards out in the first quarter, giving the redshirt junior his first career two-touchdown game. He tacked on a 5-yard touchdown run in the third quarter for Wake Forest (1-2), which matched the fourth-most points in program history.

Hartman completed 12 of 16 passes for 166 yards as the Demon Deacons won in their lone non-conference outing of the season.

Campbell quarterback Hajj-Malik Williams was 17 of 29 for 187 yards with one touchdown and two interceptions. Williams and receiver Mason Donaldson each threw and caught a touchdown pass, with Donaldson’s pass going to Williams on a 26-yard trick play.

Wake Forest, which led 24-7 at halftime, scored three touchdowns in the first nine minutes of the third quarter, beginning with Hartman’s 9-yard toss to Taylor Morin.

The game was moved up one week to accommodate Wake Forest’s schedule. The Demon Deacons’ scheduled Sept. 26 game with Notre Dame was postponed until December because of Notre Dame’s coronavirus concerns. Shifting the Campbell-Wake Forest game prevented the Demon Deacons from having two consecutive weeks without a game.

Campbell: The Camels dropped to 0-8 all-time against FBS competition, including the four losses this season. Campbell dropped those games this year by an average of 26.5 points, beginning with a one-point setback at Georgia Southern.

Campbell: This ended the fall season for the Camels, who’ve indicated they’ll pass on playing a potential spring schedule set up by the Big South Conference.

Wake Forest: The Demon Deacons are slated for what will become an open week for the second time in three weeks before hosting Virginia on Oct. 17.