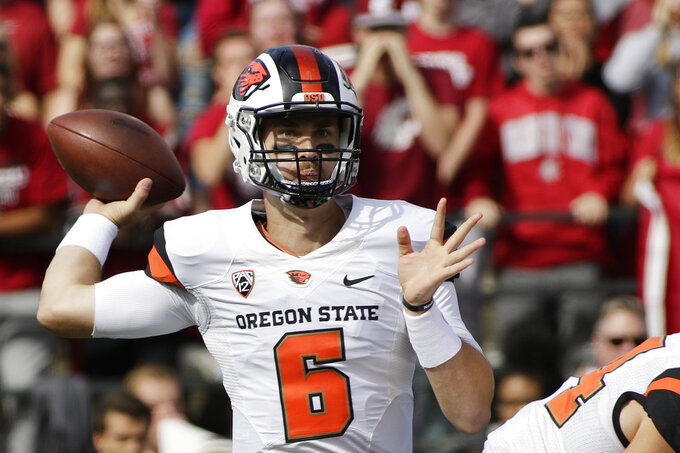 FILE - In this Sept. 16, 2017, file photo, Oregon State quarterback Jake Luton throws a pass during the first half of an NCAA college football game against Washington State in Pullman, Wash. It was still uncertain during the week whether Luton would be back in time for the game against Southern Utah on Saturday, Sept. 8, 2018. He left the opener at Ohio State with concussion-like symptoms after the first series and was replaced by backup Conor Blount. (AP Photo/Young Kwak, File)

Oregon State quarterback Jake Luton's availability for Saturday's game against Southern Utah remains unclear.
Luton left the opener at Ohio State with concussion-like symptoms after the first series and was replaced by backup Conor Blount. The Beavers (0-1) lost 77-31 to the fourth-ranked Buckeyes.
Luton practiced as much as he was allowed this week, but coach Jonathan Smith said he hadn't yet gotten the final word about whether he could return.
The Beavers had hoped going into the season that Luton would be a steady starter after last season, when he played in the first four games before sustaining a spine injury that kept him sidelined for the rest of the season.
Blount completed 12 of 19 passes for 169 yards and two touchdowns against Ohio State.
"I do think Conor came into the game and did some really good things," Smith said. "It's tough on guys — if they're not the starter — to prepare like they're the starter. But I think the way Conor played he showed that. Gave us a spark."
Blount could start even if Luton is ready because of the matchup. Southern Utah fell at home in its opener 34-30 to North Alabama.
Christian Lopez threw a one-yard touchdown pass to Dexter Boykin with 12 seconds remaining in North Alabama's debut at the FCS level. Southern Utah had trouble containing Lopez, who threw for 350 yards and three touchdowns, while also rushing for 105 yards.
"I know they didn't come out with a win last weekend, but really probably should have, had a couple of tough calls on them" Smith said.
Southern Utah quarterback Chris Helbig threw for 316 yards and two touchdowns in the opener. A community college transfer, Helbig won the starting job in fall camp.
"He played well and got the ball to the right places," coach Demario Warren said. "Obviously there's some mistakes and he's got to get better at those but I was pleased with his first start."
Other things to know as Oregon State hosts Southern Utah:
SCOUTING SOUTHERN UTAH: The Thunderbirds went 9-3 overall last season and 7-1 in the Big Sky. They lost in the second round of the FCS playoffs to Weber State. Southern Utah has never defeated a team from the Pac-12, but has beaten an FBS-level opponent once before — UNLV in 2011. They fell 77-21 at Oregon in last year's season opener.
The Thunderbirds haven't played the Beavers before.
ADDITIONS: The Beavers this week welcomed Tristan Gebbia , who transferred from Nebraska. Gebbia must sit out this season under NCAA rules but will have three seasons of eligibility. Smith had tried to recruit the pro-style quarterback while serving as offensive coordinator at Washington. Linebacker Avery Roberts also transferred to Oregon State from Nebraska, the team said.
"We're happy that they're involved and with us and I believe they'll really help us in the future," Smith said.
KEEP AN EYE ON: Oregon State running back Artavis Pierce had 11 carries for 168 yards and two touchdowns against Ohio State. He had runs of 80 and 78 yards in the third quarter. Ohio State hadn't given up two runs of 78 yards or more in a season going back 40 years. Pierce also had three catches for 41 yards.
Smith said he was impressed: "I didn't know he was that fast."
HISTORY: This is Oregon State's sixth consecutive home opener against a Big Sky school. The Beavers lost at home to Eastern Washington 49-46 in 2013, but they've won all the matchups since with opponents from the conference.
___
More AP college football: https://apnews.com/tag/Collegefootball and https://twitter.com/AP_Top25