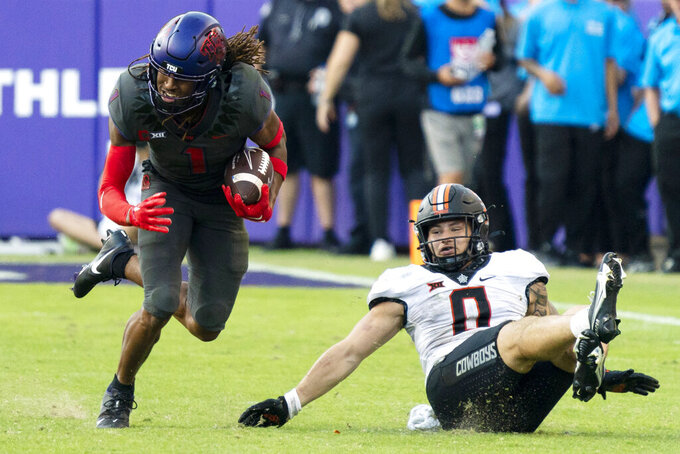 TCU wide receiver Quentin Johnston (1) runs with the ball in front of Oklahoma State linebacker Mason Cobb (0) during the second half of an NCAA college football game in Fort Worth, Texas, Saturday, Oct. 15, 2022. (AP Photo/Sam Hodde)

Line: TCU by 3 1/2, according to FanDuel Sportsbook.

The winner takes over sole possession of first place in the Big 12 standings. TCU has already won three consecutives games over ranked teams for the first time in school history, and the last two have been matchups of undefeated teams (Kansas and Oklahoma State). Kansas State is coming off an open date after its 10-9 win at Iowa State, its third win in a row since that unexpected loss to a Tulane team that this week moved into the AP Top 25 for the first time since 1998. The Wildcats have won three in a row over the Horned Frogs.

Kansas State DE Felix Anudike-Uzomah vs. the TCU offensive line that has allowed only three sacks in three Big 12 games. The 6-foot-4, 255-pound true junior is tied for the national lead with 1.08 sacks per game (6 1/2 total). He had a career-high four sacks against the Horned Frogs last season.

Kansas State: Adrian Martinez and Deuce Vaughn are the only QB/RB combo in the country to both have more than 500 yards rushing. Martinez, the dual-threat quarterback, has 546 yards with nine rushing TDs, while Vaughn has 661 yards and three TDs.

TCU: Quentin Johnston followed up his career-best 14-catch, 206-yard performance against Kansas with eight catches for 180 yards against Oklahoma State last weekend. He had a TD catch in both games. Johnston led the Frogs with 634 yards receiving last season, and now has 500 midway through his junior season.

TCU RB Kendre Miller has rushing TDs in all six games, and his seven-game streak overall is tied for the second-longest in school history behind LaDainian Tomlinson’s 15 in a row from 1999-2000. ... The Kansas State defense has allowed only 16.7 points and 355 total yards per game, while also forcing nine interceptions. ... TCU is second nationally gaining 7.7 yards per play, while ranking third in scoring offense (45.8 points) and total offense (526 yards). ... This is the first time since the end of the 2012 season that TCU plays four consecutive Top 25 teams.