Big Ten Preview: No. 5 Buckeyes on roll heading to Indiana 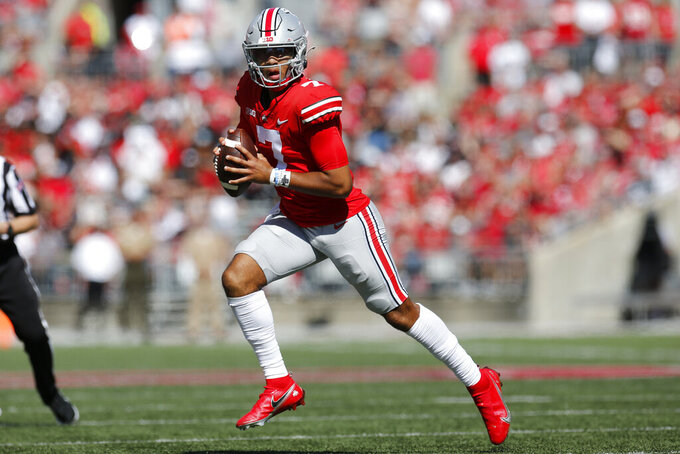 Things to watch during Week 8 of play in the Big Ten Conference:

No. 5 Ohio State at Indiana

The Buckeyes (5-1, 3-0 Big Ten) haven't lost to the Hoosiers since 1988. They have the top offense in the country and they're revving up on defense, which is bad news for an Indiana offense that has scored a combined 15 points in its last two games. Michael Penix Jr. passed for nearly 500 yards at Ohio Stadium in last year's game and led the Hoosiers back from a four-touchdown deficit before they lost 42-35. But this isn't the same Indiana (2-4, 0-3). Penix is hurt and not expected to play.

Purdue (4-2, 2-1) offense vs. Wisconsin (3-3, 1-2) defense. The Boilermakers' three-quarterback rotation did a number on Iowa last week, and No. 25 Purdue earned its first ranking since 2007. Aidan O'Connell did most of the throwing against the Hawkeyes and is front and center of the Big Ten's top passing offense along with David Bell, who had a career day in Iowa City. Wisconsin comes in with the top pass defense. Opponents are completing only 52% of their attempts.

Maryland (4-2, 1-2) is a 4 1/2-point underdog on the road against Minnesota (4-2, 2-1), according to FanDuel Sportsbook. The Terrapins are coming off an open date after giving up a combined 117 points to Iowa and Ohio State following a 4-0 start. The Gophers have won two straight, and QB Tanner Morgan was red hot against Nebraska last week. Minnesota is no juggernaut, and a loss to Bowling Green showed the Gophers can lay an egg. The Terps' defense needs to find a way to get off the field against Minnesota's clock-eating offense.

An open date gave No. 7 Penn State (5-1, 2-1) extra time to prepare Ta’Quan Roberson for his first career start against Illinois (2-5, 1-3). It still isn't clear who will take the first snap. Coach James Franklin said Roberson and Christian Veilleux have been splitting work with the No. 1 offense this week, and the competition is close. Roberson took over for an injured Sean Clifford in the second quarter against Iowa on Oct. 9, and things didn't go well. Veilleux is a true freshman who has not been on the field even in mop-up duty.