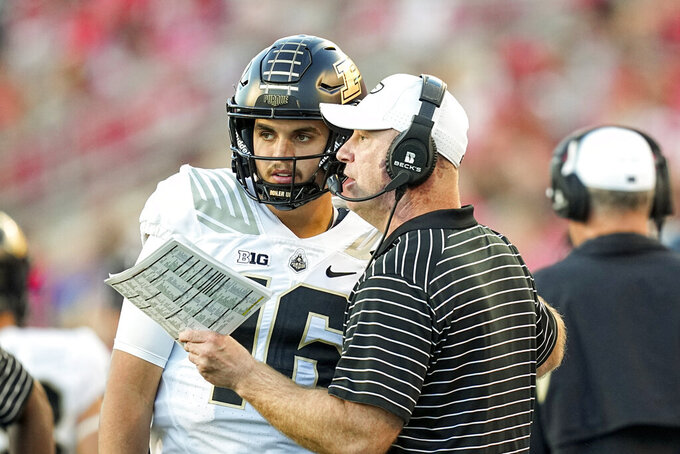 Things to watch during Week 11 of play in the Big Ten Conference:

This game has the potential to swing the momentum in the West Division race. An Illinois win would give the Illini a one-game cushion heading into next week's game at Michigan and the tiebreaker over each of the five other teams still mathematically alive in the West. A Purdue win opens the door to a possible four-way tie for first by Saturday night and a number of scenarios for each to reach the conference championship game. With national rushing leader Chase Brown, Illinois should feel good about its chances after seeing Iowa freshman Kaleb Johnson run for 200 last week against Purdue.

Both teams are playing their best football as they enter what amounts to a West knockout game. Iowa's offense finally has shown a pulse the last two games, but those were against defenses in the bottom half of the Big Ten. Iowa faces a tough task running against a Wisconsin defense that's given up no more than 118 yards rushing against unranked opponents. The Hawkeyes' young offensive line also must be wary of a pass rush that recorded five sacks last week against Maryland and nine in the past three games.

Nebraska is listed as a 30 ½-point underdog at No. 3 Michigan, according to FanDuel Sportsbook. The Cornhuskers haven't been as big an underdog since at least 1995, according to the OddsShark database. The closest was in 2004 when they got 29 1/2 points at Oklahoma, which won 30-3. ... Rutgers has generated a combined 62 yards rushing in its past two games, against Michigan and Minnesota. That's the lowest total in back-to-back games since Temple (minus-13) and Notre Dame (14) held the Scarlet Knights to 1 yard in 2002. ... Michigan State is tied for first nationally with 14 forced fumbles. ... Illinois has won five straight against West opponents. ... Purdue's Aidan O’Connell is the only Big Ten quarterback averaging more than 300 yards passing in conference play. ... Minnesota's comeback from a 10-point deficit to beat Nebraska 20-13 last week was its biggest since it erased a 14-point deficit to beat the Huskers in 2014.

Maryland is a 10 1/2-point underdog at No. 14 Penn State, according to FanDuel Sportsbook. The game matches two of the Big Ten's top passers in the Terrapins' Taulia Tagovailoa and Nittany Lions' Sean Clifford. It's a tough ask for the Terps to win at Beaver Stadium like they did in 2020. They're in the second game of a three-game stretch against some of the most physical teams in the conference (Wisconsin, Penn State, Ohio State), and the way they got outmuscled last week was not a good sign.

Ohio State WR Marvin Harrison Jr. is due for a big game at the Horseshoe as he goes against Indiana's Big Ten-worst pass defense. Harrison leads the conference with 10 touchdown catches but he hasn't had one in two games. The Hoosiers have given up a conference-high 21.