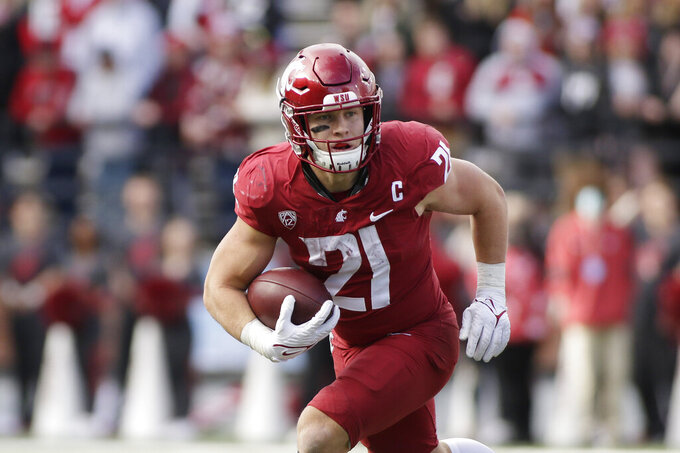 Paced by Pac-12 rushing leader B.J. Baylor, Oregon State's improved ground game is one of the key reasons the Beavers are just a win away from bowl eligibility for the first time since 2013.

Baylor is one of several notable Pac-12 running backs who have hit their stride this season. He's grabbing attention not only for the numbers he's putting up, but also for the role he plays in this season's rise of the Beavers (5-2, 3-1 Pac-12).

The junior running back leads the Pac-12 with an average of 118.6 yards per game. He was named the Pac-12's Offensive Player of the Week this week after rushing for 152 yards in Oregon State's 42-34 victory over Utah last weekend.

He was asked what it's like to see lanes opening in front of him. “It feels great. I mean, every game going in I know the offensive line is going to do their job,” Baylor said. “It’s just now we (the running backs) know that we've got to execute all of our jobs.”

Baylor started to put up good numbers last year but was playing in the shadow of Jermar Jefferson, now with the Detroit Lions. And, like the rest of the Pac-12, the Beavers were limited by a shortened season because of the coronavirus.

Baylor is part of a rushing attack that averages 245 yards a game, ranked first in the Pac-12 and seventh in the nation.

Other Pac-12 running backs of note this season:

Dye has rushed for 562 yards and eight touchdowns for Oregon this season, upping his game considerably when CJ Verdell was injured in the Ducks' loss to Stanford. Out for the season, Verdell had rushed for 161 yards and two touchdowns in Oregon's big win against Ohio State earlier this season.

Dye, the younger brother of former Duck and current Minnesota Vikings linebacker Troy Dye, became the first player in the FBS to rush for four touchdowns on four consecutive carries last weekend at UCLA. That while only rushing for 35 total yards on 14 carries.

It was questionable whether Dye would even play because of a migraine in the hours before the game.

The Ducks are averaging 197.6 yards per game on the ground and are tied for second in the Pac-12 with 21 rushing TDs.

“It’s so, just gratifying," Dye said about reaching the end zone. "It’s everything in one, it’s all emotions just all hitting you at once. It’s what it means to be human, I believe, you know? Like just hitting that end zone and just feeling that energy. It’s crazy.”

A native Californian who transferred back home after playing for Michigan, Charbonnet leads the conference with 125 carries and ranks second with 732 total yards for UCLA.

Although he struggled with injury last season, Charbonnet has surpassed the 726 yards he rushed for as a freshman in 2019 for the Wolverines.

Along with fellow running back Brittain Brown, Charbonnet and the Bruins (5-3, 3-2) rank second in the league with an average of 206.1 rushing yards a game.

Amid the turmoil within the Washington State program that accompanied the dismissal of coach Nick Rolovich, Max Borghi came alive last week and ran for a career-high three touchdowns, but the Cougars still fell to BYU, 21-19. Borghi now has eight rushing touchdowns for Washington State (4-4, 3-2) who visit Arizona State this weekend. He's got 28 career rushing touchdown for the Cougs, second-most in school history.

Speaking of Arizona State (5-2, 3-1), the Sun Devils lead the league with 22 rushing touchdowns. They're led by Rachaad White, who has rushed for 483 yards and nine touchdowns this season. White is 97 yards away from 1,000 for his career.