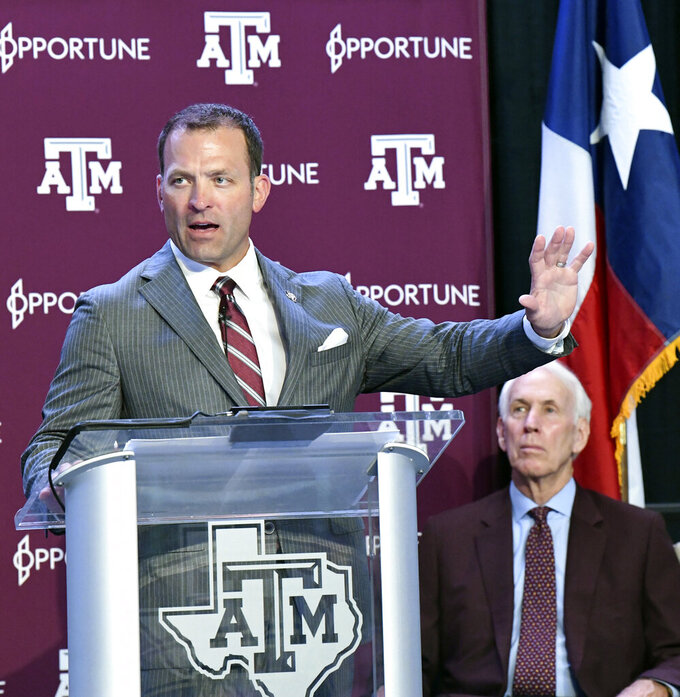 COLLEGE STATION, Texas (AP) — When Ross Bjork first visited Texas A&M more than two decades ago, the way the old press box at Kyle Field shook as fans locked arms and swayed during the Aggie War Hymn gave him a taste of just how enthusiastic Aggie fans were.

That moment piqued his interest in the university, and after working at several other schools since that day in 1998, Bjork is at Texas A&M after being hired as the school's new athletic director. Bjork, who is the Mississippi athletic director, was introduced on campus on Monday but won't officially begin work until July 8 as he wraps things up at his current job.

"There was just a ton of passion here," he said. "The students stand the whole game and you have the 12th Man and the Corps (of Cadets) and the band and all those things. I'm a student of college athletics. I love going on a different campus and seeing what they have to offer."

Renovations to Kyle Field in 2015 brought with them a new press box, which moves considerably less than the former one, but it still shakes a bit when the 100,000-plus fans get particularly rowdy.

"When you come on this campus ... you know that this place is special and they care and it's big time," he said. "And if the stadium is shaking, you know you're at a special place."

R.C. Slocum has served as the school's interim athletic director since Scott Woodward left to be LSU's athletic director in April. The former Texas A&M football coach will remain in that role until Bjork takes over in July before transitioning back to special assistant to the president of the university.

Bjork was asked if people should expect to see him at a lot of athletic events and out and about around the community.

"I want to be there," he said. "I want to be actively involved in everything we do. This is not an 8-to-5 job. This is a lifestyle."

Though he won't even start work in College Station for more than a month, Bjork was quizzed on the possibility of Texas A&M allowing alcohol sales at football games this fall after the Southeastern Conference lifted its ban on booze during the conference's spring meetings last week.

Though beer and wine sales are now permissible conference-wide, the league left it to each school to decide whether alcohol will be allowed.

"Whatever the local philosophy is should apply," Bjork said. "I like the flexibility. I don't know enough about Texas A&M yet. I know they've looked at a few things and they're looking at more of how things could be implemented. But I know we have not made a final decision on what the direction is yet."

Bjork also weighed in on the direction of the football program under coach Jimbo Fisher, who signed a 10-year, $75 million contract to take over before last season. Fisher, who went 9-4 last season, won a national championship at Florida State in 2013.

"When you have a championship head coach not many programs have that. So that's a great starting point," Bjork said. "We have the right ingredients. Now we've just have to go to work and really get after it."

"He has a great vision for the overall department and for the complete student-athlete experience," Fisher said. "He has done a tremendous job in the area of academics as well as fundraising to help provide the necessary resources needed for excellence in all areas."

Bjork was accompanied by his wife Sonya and sons Paxton and Payton at his welcome event on Monday. He said their quality of life was important in his decision to take the job, and said he's always liked Texas.

"Los Angeles was cool and Miami was fun, but we love college towns," Bjork said.