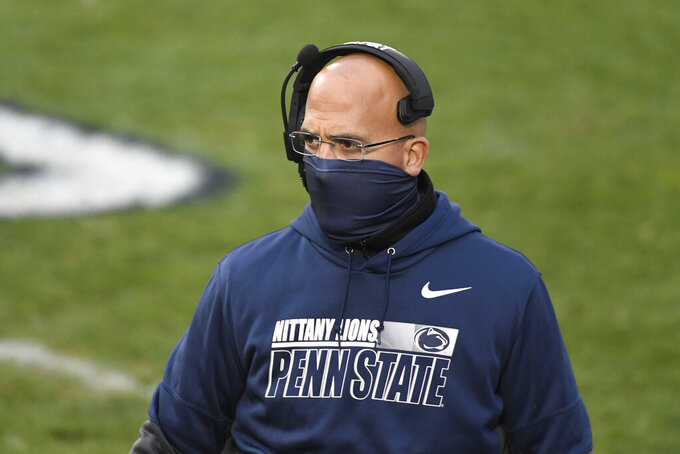 Things to watch during the sixth week of play in the Big Ten Conference:

This isn't a game of the week in the traditional sense, but it's sure to draw lots of eyeballs. Penn State is 0-5 for the first time, the quarterback situation is murky and coach James Franklin doesn't appear to have any answers. The state of Michigan's program is summed up by the fact it needed three overtimes to beat Rutgers and improve to 2-3. Jim Harbaugh has one more year left on his contract. The question is whether he'll be at Michigan after next month.

Maryland QB Taulia Tagovailoa vs. Indiana's pass defense. Tagovailoa has thrown for 676 yards in the last two games, the most by a Maryland quarterback in back-to-back wins since Scott Milanovich passed for 692 in 1994. The Hoosiers are in bounce-back mode after losing to Ohio State, and their secondary must be up to the task against a quarterback who has completed 72% of his passes and thrown six TD passes in his last two games.

Division leaders Ohio State and Northwestern are big favorites in their road games. The Buckeyes are giving 28 points against an improving Illinois. The last time Ohio State lost as a double-digit favorite was in 2018, a 49-20 defeat at Purdue. Northwestern is favored by two touchdowns against Michigan State. The Wildcats' last loss as a double-digit favorite also was in 2018, a 39-34 defeat to Akron at home.

Nebraska is a 14-point underdog at Iowa on Friday and should be eager to atone for its embarrassing 18-point home loss to Illinois. The Hawkeyes are on the rise following a slow start. They've won five in a row in this rivalry, the last two on field goals with 0 and 1 second remaining.

Purdue WR Rondale Moore, if his hamstring is right, could be in line for a big follow-up to his 15-catch game against Minnesota. Moore is a rare talent, and Rutgers' pass defense has given up 8.1 yards per attempt and 15 touchdowns and has just two interceptions in five games.

By Hank Kurz Jr. 31 minutes ago
By Ralph D. Russo an hour ago
By Pat Graham 3 hrs ago
By Tanner Marlar 9 hrs ago
By Steve Reed 10 hrs ago