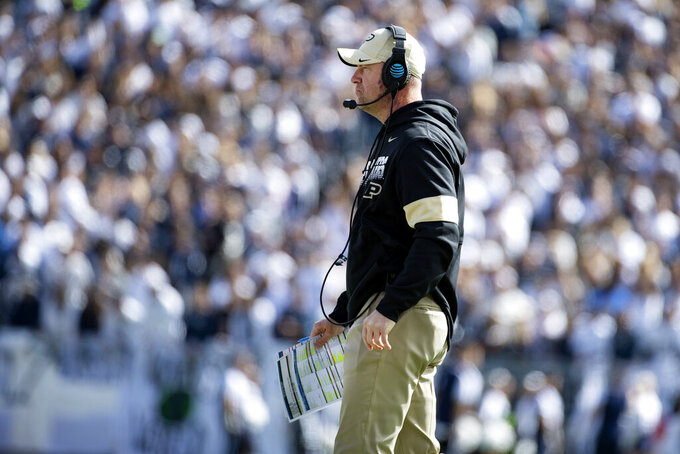 FILE — In this Oct. 5, 2019, file photo, Purdue head coach Jeff Brohm watches the action against Penn State in the third quarter of an NCAA college football game in State College, Pa. Brohm built his reputation as an offensive innovator. This season, he is trying to come up with the perfect defense. (AP Photo/Barry Reeger, File)

This season, he is trying to come up with the perfect defense.

After allowing nearly 30 points per game last season and finishing with a second straight losing record, Brohm made another defensive overhaul, one he hopes creates a turnaround.

“I wanted to get on the defensive side of the ball myself quite a bit more," he said. “We want a lot of voices in the (defensive) room giving their opinion, giving their input and putting the best plan together for our guys to go out there and make plays."

The transformation began with a revamped coaching staff.

Those three brought in a new philosophy that's already been evident at practice.

Staying healthy would help, too.

All-conference defensive end George Karlaftis led the Boilermakers with two sacks last season but finished with only four tackles because he missed the final three games with COVID-19 and a leg injury. Starting linebacker Semisi Fakasiieki was carted off the field last week with an undisclosed injury.

While Fakasiieki's status remains unclear, Karlaftis is back along with his brother, Yanni, a highly-touted freshman linebacker.

Add some other key cogs such as defensive end DaMarcus Mitchell, cornerback Cory Trice and hard-hitting safeties Marvin Grant and Cam Allen, and the Boilermakers just might have a quick fix.

“We want to put the best package we can together but be aggressive in our approach, really play offensive offense on the defensive side this year," Jeff Brohm said. “As much as we can, we want to allow our guys to take chances and make plays and have fun doing it."

David Bell has been one of the Big Ten's best receivers the last two seasons. With Rondale Moore in the NFL, Bell won't have to share the spotlight or the targets, though he might get the full attention of opposing defenses.

Key to Purdue's success might be finding a complimentary player for the 6-foot-2, 205-pound star.

“I probably got in trouble doing that a couple too many times last year," quarterback Aidan O'Connell said when asked about looking for Bell. “But he breaks open for so many plays, it's hard not to. I think against Northwestern, maybe even Iowa, I had 19 or 20 targets to him. It's tough to go back and watch those games."

Jack Plummer is 2-7 as the starter over the past two seasons while Aidan O'Connell is 3-2 as the starter. This year, they'll square off against former UCLA quarterback Austin Burton, too.

“I just feel a lot more comfortable after going through a spring," Burton said. “It was a weird kind of first season here."

Zander Horvath, the 6-foot-3, 230-pound running back, has been compared to former star Mike Alstott. And not just because both players wore No. 40. Horvath had a team-high 449 yards rushing last season, averaging 5.0 per carry, and was third in receptions with 30 for 304 yards. Purdue needs him to replicate those numbers this year.

“We've got to be able to create some space for him on the outside and on the inside for runs to get him going," Brian Brohm said. “He's got that size and he's got the speed. He also has good hands."

Purdue's first chance to snap a four-game losing streak comes at home Sept. 4 against Oregon State. Notre Dame is back on the schedule, Sept. 18, and though the Boilermakers open Big Ten play at home against Illinois and Minnesota, it's the two-week midseason stretch that may prove the best measuring stick. They play at Iowa on Oct. 16 and host Wisconsin on Oct. 23.