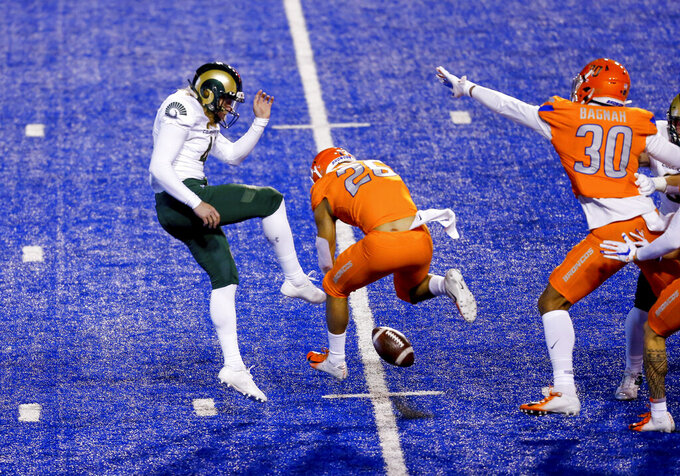 BOISE, Idaho (AP) — Avery Williams blocked two punts that were returned for touchdowns in the first half, Boise State had three special teams touchdowns off blocked kicks, and the Broncos routed Colorado State 52-21 on Thursday night.

Williams recovered his own blocked punt for a touchdown 52 seconds into the game. Late in the first half, Williams came off the edge and blocked his second punt, this one picked up by DJ Schramm and returned 20 yards for a TD that made it 42-7.

Williams was the Mountain West special teams player of the year a season ago. He has seven career special teams touchdowns, the first six coming on kickoff or punt returns, including an 88-yard kickoff return fort a TD this season at Air Force.

“Special teams has always been my No. 1 thing,” Williams said. “So the fact that we can execute all of that and have it play out the way it did that’s really big for our program.”

Kekaula Kaniho also returned a blocked field goal 91 yards for a score late in the first quarter. It was the first time Boise State had multiple blocked kicks returned for touchdowns in a game since moving to the FBS in 1996.

Andrew Van Buren scored on a pair of 1-yard TD runs in the first half and Hank Bachmeier added a 5-yard TD pass to Riley Smith. Bachmeier returned after missing the past two games and was 16 of 28 for 202 yards.

All the momentum from Colorado State’s victory over Wyoming last week evaporated with its 10th straight loss to the Broncos. Patrick O’Brien was 9-of-20 passing in the first half, including an interception, and was replaced by Todd Centeio.

Colorado State (1-2, 1-2) pulled to 42-21 early in the third quarter after scoring 14 points in 17 seconds. Centeio hit Trey McBride on a 21-yard TD pass. Williams fumbled the ensuing kickoff, and A’Jon Vivens rumbled 17 yards for a score.

But that was as close as the Rams would get. Boise State offensive lineman Nick Crabtree recovered teammate Khalil Shakir’s fumble just shy of the goal line and scored late in the third quarter to cap the scoring.

“A lot of guys scored tonight that we would not expect to score tonight. And I think that’s awesome,” Boise State linebacker Riley Whimpey said.

Boise State announced before kickoff that nine players were out due to positive COVID-19 tests, with another five out due to contact tracing.

“Hopefully moving forward we’re able to keep that more under control, because as a team you never want to lose guys,” Whimpey said.

Colorado State: The Rams had plenty of special teams issues but their offense didn’t help. Colorado State had just 18 total yards over the first four drives and trailed 14-0 before getting a first down.

Boise State: The Broncos have not lost consecutive games since 2016 and haven’t lost two straight at home since 2015.