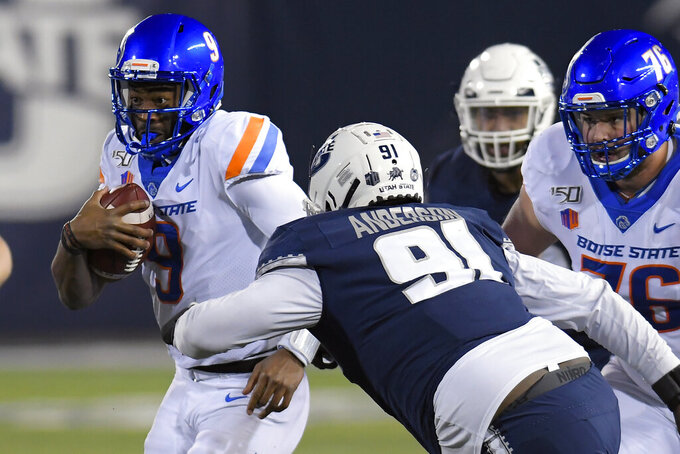 Not the team of Kellen Moore and Doug Martin. Not the squads of Jay Ajayi or Brett Rypien, either.

With a win Friday at Colorado State, the 20th-ranked Broncos can go undefeated through Mountain West regular season play for the very first time.

“Around here, let’s be honest, there’s not a lot of things that you get a chance to do for the first time,” Boise State coach Bryan Harsin said. “There’s been a lot of success at Boise State over the years. When you get a chance to talk about doing something for the first time, if that doesn’t fire you up as a competitor, then something is wrong with you.”

Boise State has finished Mountain West play with one loss five times since joining the league in 2011. That includes in 2017, when a team that had Rypien (now with the Denver Broncos) and linebacker Leighton Vander Esch (a first-round pick by Dallas in ‘18) lost the regular-season finale to Fresno State. The following week, the Broncos beat the Bulldogs in the league’s title game.

“Everybody’s attention is on what we need to do this week,” Harsin said. “It’s all about us finishing. That’s our mindset.”

This sure got Colorado State’s attention: Boise State storming out to a 49-point lead on Utah State last weekend as the team cruised to a 56-21 win.

“They jumped on Utah State so quick I had to turn the channel and wait until the next day before I started watching Boise a little more,” said Rams coach Mike Bobo, who could be on the hot seat after a second straight losing season.

Boise State’s offense can take off in a hurry — no matter who’s playing quarterback for the Broncos. Jaylon Henderson directed the offense to precision at Utah State as he threw three TD passes. He was stepping in with starter Hank Bachmeier and backup Chase Cord banged up.

The Broncos remember that well.

“We watched it in the past to show what happened,” Harsin said. “We came back to win it, but that was as ugly as can be early on. There’s no one in this room that wants to see that happen again.”

A blizzard Tuesday dropped more than a foot of snow in Fort Collins, which could make the conditions sloppy. The weather forecast for Friday is temperatures in the low 30s with a possible light snow/rain mix in the afternoon.

“Sometimes when it’s sloppy it gives a team that’s an underdog a better advantage,” Bobo said. “But we’re going to have to play in it, too.”

The Rams will honor 13 seniors as they try to send them out on a winning note. Some of them were part of Bobo’s early recruiting class.

“It does take you back,” Bobo said. “You realize you’ve been here a while and seen guys grow up. I wish they would have been able to leave with a chance to play for a championship.”

Colorado State is looking for its first win over a ranked opponent since beating No. 22 Virginia and No. 7 Colorado to start the 2002 season. The Rams are 13-34 against ranked teams since 1993.

“Any time you’re playing somebody that’s considered one of the best teams in the country, it gives you an extra incentive as a football team to go out and prove that you can play with anybody,” Bobo said.

Under Harsin, the Broncos have turned in five 10-win seasons and are about to make their fourth trip to the league’s championship game. On Dec. 7, they will host Hawaii, a team they beat 59-37 on Oct. 12 in Boise.

Boise State closed the regular season with back-to-back road games. It’s the first time the Broncos have done that since 1991 and only the fourth time in school history.