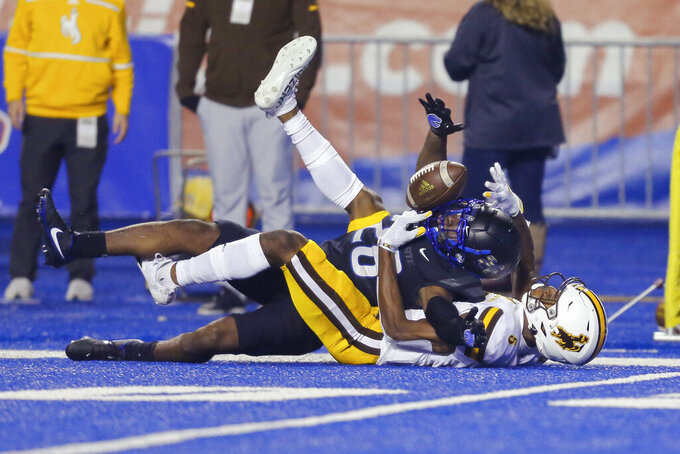 Wyoming wide receiver Isaiah Neyor (5) fights for the ball with Boise State cornerback Caleb Biggers (26) as they fall to the ground during the second half of an NCAA college football game Friday, Nov. 12, 2021, in Boise, Idaho. The pass was incomplete. Boise State won 23-13. (AP Photo/Steve Conner) 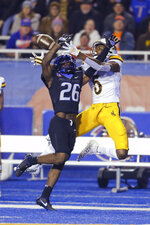 Boise State continued its mastery of Wyoming, winning its fifth straight and 15th out of 16 games in the series.

After exchanging touchdowns, the teams settled in for a defensive slugfest in the first half. Jonah Dalmas booted a 43-yard field goal as time expired to give Boise State a 10-7 halftime lead.

“We definitely started way too slow on offense,” Boise State coach Andy Avalos said. “We’re going to make sure that we pick that up. That was not a good look and we need to clean that up as we move forward and make sure that we’re more efficient.”

Boise State continued to struggle offensively in the second half, managing only a 35-yard field goal from Dalmas before the Broncos’ defense provided the spark to break the game open.

With Boise State holding a tenuous 13-7 lead midway through the fourth quarter, Wyoming quarterback Levi Williams scrambled out of pressure and threw an ill-advised pass, which Demitri Washington intercepted and returned to the Cowboys 13.

Dalmas converted from 29 yards out for his third field goal of the game to extend the lead to 23-7 with 59 seconds remaining.

But the Cowboys didn’t quit.

Williams found Isaiah Neyor on a 74-yard scoring strike with four seconds remaining to draw within 23-13. But Wyoming couldn’t convert on a two-point conversion, ending its hopes of a miracle comeback.

“This one was tough for us,” Wyoming coach Craig Bohl said. “There was a lot of emotion that went into this game, and it’s disappointing. But we need to hang together and get ready for the next one.”

Williams finished with 156 yards passing and 36 yards rushing to lead the Cowboys’ offensively.

Wyoming: The Cowboys continued their stellar defensive play, but couldn’t capitalize with their anemic offense. If Wyoming hopes to get bowl eligible with a win in its last two games, it will need to figure out a way to give Williams better protection in the passing game and increase its offensive production.

Boise State: After a 3-4 start, the Broncos are starting to put the pieces together under Avalos in his first year as head coach. And while Boise State will need some help to reach the Mountain West championship game, it’s within reach and possible if the team continues its recent run of solid play on offense, defense, and special teams.

Wyoming remains on the road, traveling to Utah State Saturday.