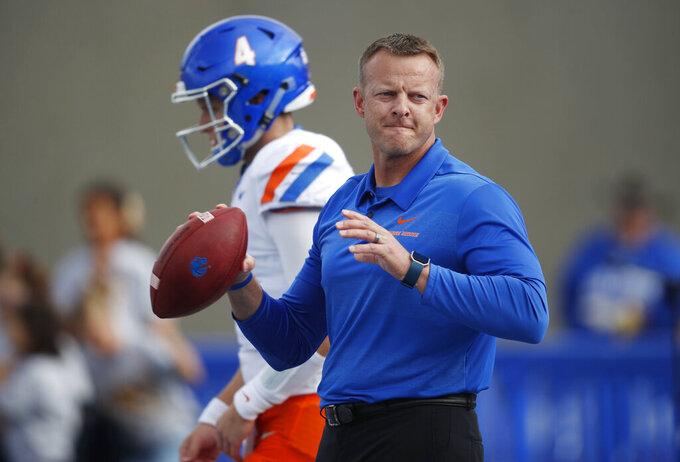 FILE - In this Saturday, Oct. 27, 2018, file photograph, Boise State head coach Bryan Harsin throws passes to receivers in front of quarterback Brett Rypien before an NCAA college football game against Air Force at Air Force Academy, Colo. This season, the Broncos don’t have reliable quarterback Brett Rypien. He’s with another rendition of the Broncos after signing as an undrafted free agent with Denver. For a change, coach Bryan Harsin is breaking in a new QB. (AP Photo/David Zalubowski, File)

Losing the Mountain West Conference championship game on its home field, followed by a bowl game that was abandoned due to severe weather was a disappointing thud following what was another mostly successful season.

That's why the transition taking place for the Broncos could be re-energizing as they begin another year with Bryan Harsin in charge.

The Broncos must break in a new starting quarterback after spending most of the past four years with Brett Rypien under center. They must find a replacement for yet another 1,000-yard running back after Alexander Mattison left early for the NFL. Their defense has potential, led by Mountain West preseason defensive player of the year Curtis Weaver, but also will feature another new face: defensive coordinator Jeff Schmedding.

The changes come as Boise State prepares for one of its biggest season openers in school history — facing Florida State in Jacksonville, Florida.

That's not an easy landing for a team making so many changes. Yet the Broncos were still picked as the favorites in the Mountain West Mountain Division in the preseason poll.

Here are other things to know about the Broncos:

QB BATTLE: Chase Cord would seem to have the lead in the competition to replace Rypien. But Cord is only 10 months out in his recovery from a torn ACL and his health is being closely monitored. Cord appeared in four games last season before being injured and his nine career passes are the most by any QB in the race. If Cord isn't healthy or struggles, the Broncos could go the freshman route again with Hank Bachmeier out of Southern California. Bachmeier is one of the most highly regarded recruits in school history. Senior Jaylon Henderson and freshmen Riley Smith and Kaiden Bennett could also be in the mix.

There is no clear heir apparent going into this season.

Sophomore Andrew Van Buren is the top returner with 163 yards rushing last season. He would appear to be the leader, but the Broncos have a trio of talented freshmen — redshirt Danny Smith and George Holani and Keegan Duncan — who could end up getting significant carries.

However it's done, the Broncos will need a strong run game to help their young QB.

WELCOME BACK: The Broncos will welcome back a significant number of contributors who missed time last season.

While Pierce solidifies the secondary and Whimpey was Boise State's leading tackler before getting hurt, Moa may be the most important returning player.

"He just makes everybody better," Harsin said. "He's the older player on the team and a damn good player and a physical player at a physical position that has a motor. And if things aren't going the way they need to, he will make sure we go the way we need to."

OUT THE GATES: The matchup with Florida State is the beginning of a lengthy run of marquee nonconference matchups for the Broncos over the next nine years. Next year, the Seminoles will visit Boise. Oklahoma State visits in 2021; Michigan State in 2022; Oregon State in 2023; and Houston in 2024.

"We've never had this model of what we're about to get into," Harsin said. "I'll tell you, it's exciting but I've been here long enough and I know how much of a challenge we've put ourselves in."

By John Zenor 47 minutes ago
By Pete Iacobelli an hour ago
an hour ago
By Ralph D. Russo 5 hrs ago
By Ken Powtak 18 hrs ago