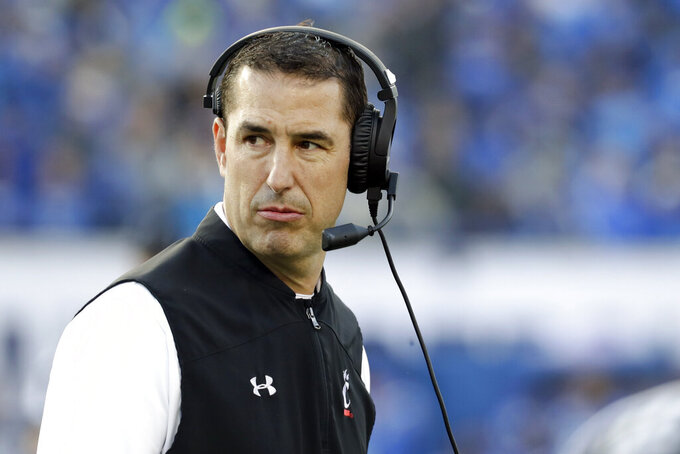 Cincinnati head coach Luke Fickell watches from the sideline during the first half of an NCAA college football game against Memphis for the American Athletic Conference championship Saturday, Dec. 7, 2019, in Memphis, Tenn. (AP Photo/Mark Humphrey)

BIRMINGHAM, Ala. (AP) — Boston College will have its new head coach at the Birmingham Bowl but only as a spectator, and won't be able to turn to star running back A.J. Dillon either.

No. 23 Cincinnati, meanwhile, finally gets to play somebody other than Memphis.

The Bearcats (10-3) face an Eagles team Thursday led by interim head man and wide receivers coach Rich Gunnell, who has guided the team since the firing of coach Steve Addazio a month ago.

Boston College (6-6) also won't career rushing leader Dillon, who opted to skip the game and his senior season to get ready for the NFL draft. New coach Jeff Hafley, who had been Ohio State's co-defensive coordinator, has been hired to replace Addazio.

“We’re out here with who we have," Gunnell said. “Stick together, we’re going to go play together. It’s going to be a fight."

Cincinnati gets a chance to rebound after losing both the regular-season finale and the American Athletic Conference championship game to No. 15 Memphis. The Bearcats still finished the regular season ranked in the AP Top 25 for the first time since 2009.

“No matter how you end the season when you have an option to go to the bowl, you've got an opportunity to right the ship and finish that thing out the right way," Bearcats coach Luke Fickell said.

The Cincinnati seniors have a chance at a second straight 11-win season after going 4-8 in 2016.

“To just finish everything off right would mean a lot to us, because we’ve just worked so hard over the years,"said linebacker Perry Young, a Birmingham native. “The whole process has been like a roller coaster."

BAILEY'S TURN Dillon's replacement at running back is no slouch. David Bailey, who's only a tad smaller than the 250-pound Dillon, has run for 816 yards and seven touchdowns while averaging 5.8 yards per carry. He gained 181 yards against North Carolina State and 172 versus Syracuse, rushing for a pair of touchdowns in each game.

It's a similar scenario to last year's Birmingham Bowl, when Memphis All-American running back Darrell Henderson opted to skip the game.

It's Gunnell's team for one game but Hafley will finally get to check out his new players in action live before officially taking over. He's expected to watch the game from a suite with athletic director Martin Jarmond.

Boston College is trying to secure a winning record for a program that went 44-44 under Addazio and posted a 1-3 bowl record. Cincinnati has a chance to reach 11 wins for the fourth time, joining Brian Kelly's teams in 2008 and 2009.

“These guys have an opportunity to make history and to go out and be remembered as one of the best senior classes that's ever played there," Fickell said.

Cincinnati has two transfers who are eligible to play after completing the NCAA's mandated one year in residence: offensive lineman James Hudson (Michigan) and safety Bryan Cook (Howard).

Cincinnati and the AAC's top scoring defense face an offense averaging 451 yards and 30.9 points per game. The Bearcats are allowing an average of 21.7 points. With Dillon, Boston College has been averaging 267.8 rushing yards.