Bowl positioning the reward as Duke plays at Pittsburgh 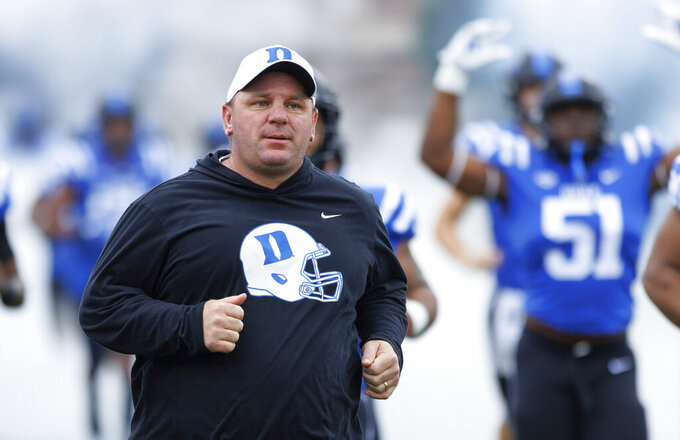 Duke head coach Mike Elko runs onto the field prior to the start of an NCAA college football game against Virginia Tech in Durham, N.C., Saturday, Nov. 12, 2022. (AP Photo/Ben McKeown)

Things to watch in the Atlantic Coast Conference in Week 12:

Improved bowl positioning could be the reward for the winner. The Blue Devils are tied with No. 20 Florida State and North Carolina State for the third-most wins in the league under first-year coach Mike Elko, but have lost 10 of their last 11 meetings with the Panthers. Both teams have allowed 22.8 points per game in league play. Pitt's Israel Abanikanda shares the NCAA lead with an average of two touchdowns per game.

Two formerly ranked teams that have fallen on hard times and are trying to regroup as they head into the postseason. The Orange have lost four in a row after a 6-0 start, and the Demon Deacons have lost three straight after winning six of their first seven.

The Hokies are limping their way through the end of the season, having lost seven in a row in Brent Pry's first season as coach. Liberty returns home after spending two weeks in the Top 25 before losing on the road at Connecticut last weekend.

Wake Forest quarterback Sam Hartman needs seven touchdown passes in his last two games to tie Tajh Boyd of Clemson for the most in ACC history. Boyd had 107 from 2010-13. ... Louisville's Malik Cunningham is one rushing touchdown shy of tying former Cardinals quarterback and 2016 Heisman Trophy winner Lamar Jackson's ACC mark of 50 rushing touchdowns by a QB. ... Cunningham (12,822) and Hartman (12,780) are fifth and sixth in total yards in league history. Philip Rivers holds the record with 13,582 yards.

Florida State quarterback Jordan Travis had one of those Swiss army knife games last week in a 38-3 victory against Syracuse. He threw for three touchdowns for the third game in a row, caught a scoring pass and ran for another score as the No. 20 Seminoles won their third straight. The victories have come by an average of 34 points and the 'Noles are seeking their first eight-win season since 2016.