Brewer clear No. 1 QB after Baylor goes from 1 to 7 wins 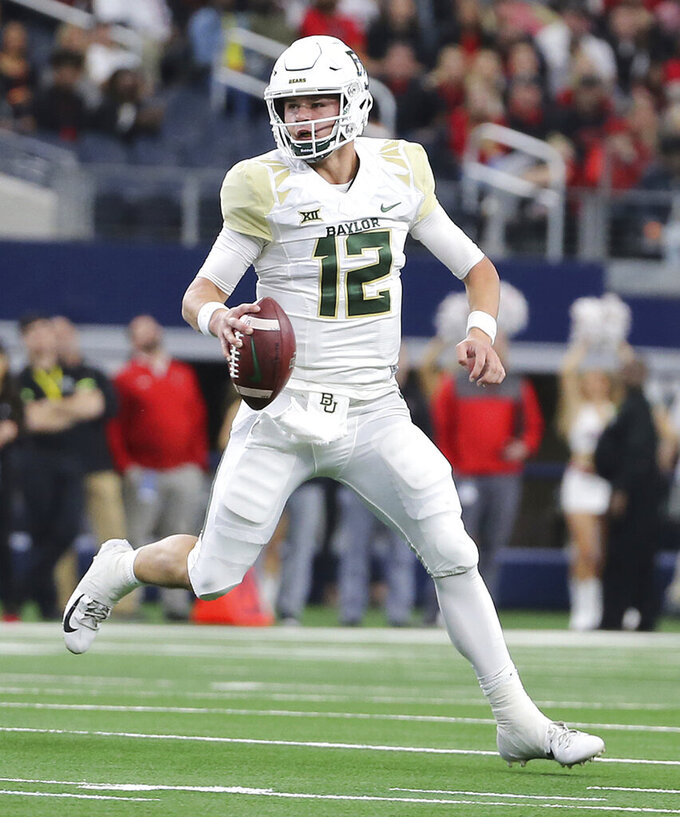 FILE - In this Nov. 24, 2018, file photo, Baylor quarterback Charlie Brewer scrambles out of the pocket before throwing a pass in the first half of an NCAA college football game against Texas Tech in Arlington, Texas. (Jerry Larson/Waco Tribune-Herald via AP, file) 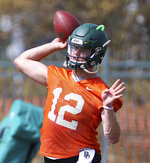 WACO, Texas (AP) — Charlie Brewer went into last season as the returning starting quarterback for Baylor, then early on shared snaps with a graduate transfer.

A returning starter again, Brewer is now the clear No. 1 quarterback.

"I put Charlie in hard positions last year, making him rotate early ... and that wasn't easy on him," coach Matt Rhule said. "But I thought it really helped him develop where he wasn't worried anymore about anything else other than, 'When I get in, here is how I'm going to play.'"

Rhule said he felt Brewer, who threw for 3,019 yards and 19 touchdowns, progressed into "an excellent quarterback" by the end of last season, when the Bears were able to run the ball and protect him.

Baylor goes into Brewer's junior season coming off a 7-6 record with a bowl victory, just a year after the Bears won only one game.

"You can go from one win to seven wins by just kind of eliminating the bad stuff, the bad decisions on the football field, the egregious errors, all those things," Rhule said.

To take another significant step, Rhule said his team has to be more consistent and be better up front. The Bears, who allowed 39 quarterback sacks, twice last season won at home following blowout road losses.

"Putting our head down and just grinding, and not get satisfied with anything that we do," receiver Denzel Mims said. "That's going to help us a lot."

Jalen Hurd is gone after the converted running back's impressive season as a receiver, ranking fourth in the Big 12 with 5.8 catches per game. Brewer still has proven targets in Mims and Chris Platt, who this year was granted a sixth season of eligibility by the NCAA for an injury-shortened junior season in 2017 when he had five TDs in four games. Mims had a 1,087 yards receiving in 2017, then last season had eight TDs for the second year in a row.

"I feel like this (WR) group is going to be a real good group," Mims said. "We've got a lot of a young talent, and we've gotten a lot of people that haven't got the chance to show that they can do something."

After a full scrimmage last spring, sophomore cornerback Kalon Barnes shed his pads, then went to the school's track facility and won a 100-meter race with a time of 10.29 seconds.

"He's a special, special person," Rhule said. "Kalon at corner has really developed where he has a chance to maybe be a big-time player."

Four-time defending Big 12 champion Oklahoma and Texas are considered by most as the league's top two teams again. Iowa State is also getting notice. Baylor plays all three of those Big 12 favorites at home. The Cyclones are in Waco for the Big 12 opener Sept. 28. The Sooners and Longhorns visit on consecutive Saturdays in November.

Rhule took 15 Baylor seniors to Philadelphia for an NFL summit this summer, and his wife was on a trip that fell on a pretty significant date.

"Me and my wife's 20th anniversary, and she was having dinner with 15 football players," Rhule said. "That's how special she is."

Ed Foley spent the past 11 seasons as a Temple assistant coach and twice was the Owls' interim coach, including for a bowl game at the end of the 2016 season after Rhule was hired by Baylor. Foley, who was an assistant head coach and recruiting coordinator for Rhule there, is now at Baylor as an analyst.

"I've offered Ed a job to come to Baylor every year since I've left," Rhule said. "Just another person that I know will tell when I'm going down the wrong path. ... I trust Ed, and I think he'll bring a lot to us from a football perspective."