Briles out at Grambling less than 1 week after being hired 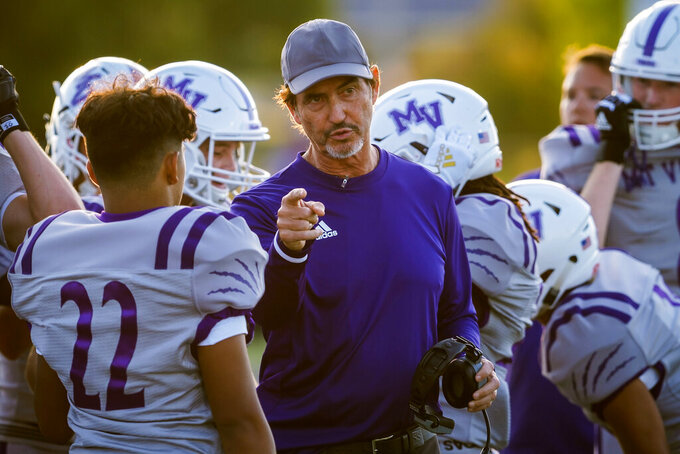 FILE - Mount Vernon High School football coach Art Briles talks to players on the sideline Aug. 30, 2019, in Bonham, Texas. Grambling State football coach Hue Jackson has hired former Baylor coach Briles as offensive coordinator, the university confirmed Thursday, Feb. 24, 2022. Briles has not worked in college football since 2016, when he was fired by Baylor after an investigation concluded he and his staff took no action against players named in sexual assault allegations. (Smiley N. Pool/The Dallas Morning News via AP, File)

Art Briles' tenure as offensive coordinator at Grambling State is over less than a week after it started.

The former disgraced Baylor coach said he didn't want to be a “distraction” at the prominent HBCU with a storied football program in northern Louisiana, leaving the program just five days after he was surprisingly hired by coach Hue Jackson.

“Thank you for giving me the opportunity to be part of your coaching staff at Grambling State University," Briles said in a statement released Monday. "Unfortunately, I feel that my continued presence will be a distraction to you and your team, which is the last thing that I want. I have the utmost respect (for) the university, and your players.”

Briles has been a pariah in college football since 2016, when he was fired by Baylor after an investigation concluded he and his staff took no action against players named in sexual assault allegations.

ESPN first reported that Briles would not coach at Grambling. It wasn’t immediately clear whether Grambling asked Briles to resign or the coach did so on his own.

The baggage surrounding Briles was well-known, but that didn't stop Jackson from making the hire last week. The 66-year-old Briles coached briefly in Italy and then at a Texas high school after he was dismissed from Baylor.

Grambling's decision received renewed attention Monday when a three-day old social media statement from the Hue Jackson Foundation gained traction. It was the latest in an avalanche of criticism for the university.

The foundation's statement said that Briles' hiring "will be instrumental in teaching others teaching others the importance of knowing how to prevent victimization, proper reporting procedures, provide adequate resources to individuals who have been victimized and develop strong law enforcement partnerships within the community.”

Former Grambling quarterback Doug Williams — the first Black quarterback to win a Super Bowl with Washington in 1988 — was one of many who voiced his displeasure with the school's decision to hire Briles in the first place. The NFL executive with the Washington Commanders said the foundation's statement didn't sway his opinion.

“I don’t know what you get from that statement,” Williams told the AP on Monday. “I don’t think anything needs to be added. Everybody knows what I think about it. I’m not going to change.”

In the Baylor case, the NCAA infractions panel stated that Briles “failed to meet even the most basic expectations of how a person should react to the kind of conduct at issue in this case. Furthermore, as a campus leader, the head coach is held to an even higher standard. He completely failed to meet this standard.”

Baylor paid Briles more than $15 million after firing him. He later acknowledged making mistakes and apologized for “some bad things” that happened under his watch.

Briles was considered one of the top offensive coaches in the country when he led Baylor from 2008-15, leading the program to a 65-37 record. His spread offense kept the Bears regularly ranked in the AP Top 25 and the program had four 10-win seasons in a five-year span from 2011-15.

Jackson is the former head coach of the NFL's Oakland Raiders and Cleveland Browns.