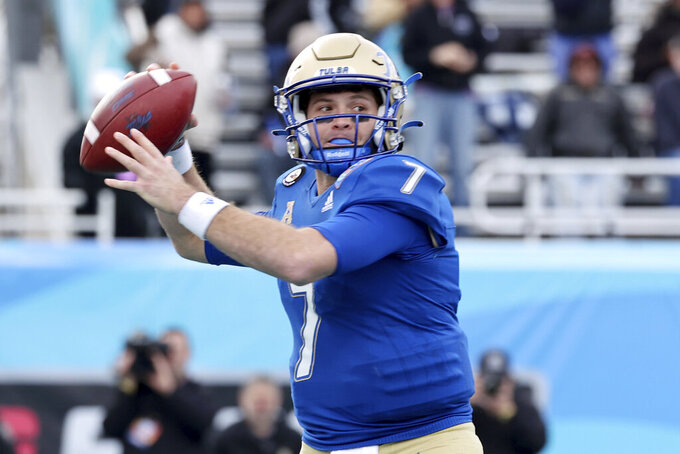 Tulsa's Davis Brin (7) throws the ball over the Old Dominion defense in the first half of an NCAA college football game in the Myrtle Beach Bowl in Conway, S.C., Monday, Dec. 20, 2021. (AP Photo/Mic Smith) 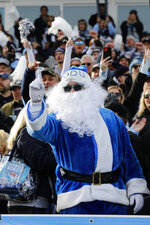 That was certainly true at the Myrtle Beach Bowl where the Golden Hurricane endured Old Dominion's stunning start — a 100-yard return touchdown by LeMareon James on the opening kickoff — on the way to a 30-17 victory Monday to close the season with four straight victories.

“We love adversity,” Davis said. “At this point, I think it fuels us.”

That showed as the Golden Hurricane (7-6) of the American Athletic Conference scored on their first two possessions to wipe out Old Dominion's lead and take control of the second-ever bowl game played on the campus of Coastal Carolina.

Davis Brin threw for 285 yards and two touchdowns, while receiver Josh Johnson had eight catches for 129 yards and tailback Shamari Brooks ran for 107 yards and a score. It was Tulsa's second straight bowl win and first since defeating Central Michigan in the 2016 Miami Beach Bowl.

Brin was named the game's MVP and his yardage total set the bowl mark, despite it's limited two-game history.

As effective as Tulsa's offense was, its defense was just as good. It held the Monarchs (6-7) of Conference USA to 135 yards through the first three quarters.

Tulsa coach Philip Montgomery knew after the opening kickoff his players wouldn't let it affect their focus. About 10 minutes later, the Golden Hurricane took the lead for good on Brooks' 1-yard run and Brin's 23-yard pass to Johnson.

“It was a big moment,” Montgomery said of the first two drives. “But it didn't surprise me.”

The Monarchs struggled to find an attack as Tulsa of the American Athletic Conference took control.

It took until the fourth quarter for Old Dominion to post an offensive touchdown on Blake Watson's 2-yard run. By then, Tulsa was up 30-17 and not about to surrender the lead.

Tulsa took advantage of safety LJ Wallace's interception — he twisted in front of the receiver to make the play — for a 35-yard field goal by Zack Long right before halftime to lead 17-10.

Johnson had his sixth 100-yard receiving game this season by the half with five receptions for 101 yards.

There was a brief flurry of lunacy in the final quarter. An unsportsmanlike conduct penalty left Tulsa at fourth-and-17 and lining up to punt. But punter Lachlan Wilson inexplicably took off running straight into a wall of Old Dominion defenders for a 1-yard loss.

The Monarchs, down 23-10, jumped on the break with a 22 yard run by Watson and a pass from Hayden Wolff to an open Ali Jennings inside the 10. As Jennings headed toward the end zone, cornerback Tyon Davis forced the ball loose for a touchback to end the threat.

Old Dominion could not rally, losing a bowl game for the first time in two appearances since joining the FBS in 2013.

Old Dominion: The Monarchs did not have the offensive firepower to keep up with Tulsa. Old Dominion's starting skill players — quarterback Hayden Wolff, tailback Blake Watson, tight end Zack Kunytz and three receivers — were all freshmen or sophomores.

Tulsa: The Golden Hurricane can use their late-season surge as a springboard into next season, although running back Brooks and receiver Johnson are both seniors.

Tulsa's Zach Long had field goals of 35, 25 and 32 yards, boosting his mark to 22 of 23 kicks this season. Long entered the postseason second in field goal percentage to Appalachian State's Chandler Staton.

The Monarchs bounced back from a 1-6 start to win their final five games and make the Myrtle Beach Bowl. Coach Ricky Rahne said his team will draw on that in the offseason. First, though, he wants his team to soak in the defeat. “I would rather marinate in this pain a little bit,” he said.

Old Dominion opens next season against Virginia Tech on Sept. 3.