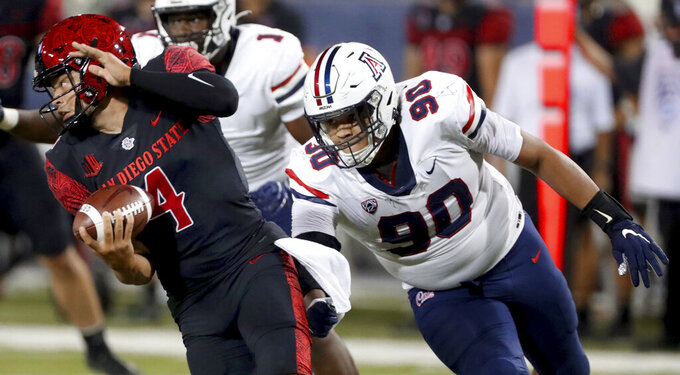 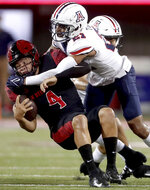 Brookshire, who won the starting job late in fall camp, completed 9 of 11 passes for two scores in the first half as the Aztecs took a 35-7 lead.

“I think this (offense) can be very dangerous,” Brookshire said. “We have so many playmakers. First of all, we have a great line. We have so many guys we can go to.”

Brookshire finished 10 of 14 for 183 yards and Bell had 125 yards rushing in 17 carries as the Aztecs opened 2-0 for the third straight season.

Bell’s 55-yard touchdown burst over the right side was an early indicator.

After Arizona (0-2) went three-and-out, Brookshire completed a 73-yard pass to Daniel Bellinger to set up a 3-yard scoring run. Bellinger had three catches for 113 yards.

“Some of the plays getting Bellinger off was something that was a little different that they haven’t seen,” San Diego State coach Brady Hoke said.

San Diego State’s Tyrell Shavers returned a blocked punt 27 yards for a score after Arizona’s second three-and-out, and it was 21-0 less than eight minutes into the game.

Arizona’s Gunner Cruz, who threw for 336 yards in a season-opening 24-16 loss to BYU last week, was 10 of 19 for 70 yards with a 43-yard scoring pass to Stanley Berryhill III and an interception.

Will Plummer was 8 of 17 for 109 yards and a 7-yard touchdown pass to Tayvian Cunningham in the fourth quarter after replacing Cruz late in the third.

“I am completely unsure go what we will do at the quarterback position,” Fisch said. “One of them will start (next week). I wanted to see if we could get a spark. A different dynamic with Will.”

San Diego State is 6-2 against Pac-12 teams since 2016 despite playing five of those games on the road and being an underdog in six. Arizona was a two-point favorite Saturday.

Golden State Warriors coach and former Arizona guard Steve Kerr was the Wildcats’ honorary captain for the game, and Fisch counts Kerr as an inspiration.

“One of the four values of the Golden State Warriors is joy,” Fisch said at Pac-12 media day. “I’ve done a lot of research in my past, and I always felt like if I ever have a chance to build my own program, joy was going to surround it.”

Kerr, who played on Arizona’s 1988 Final Four team, was inducted into the Arizona Hall of Fame in 1993.

Senior running back Greg Bell has seven 100-yard rushing games, six of which have come in his nine games with the Aztecs. Bell, who had a career-high 161 against New Mexico State last week, had one 100-yard game at Michigan.

San Diego State: With quarterback play like this, the Aztecs will contend in the Mountain West West. The Aztecs play good defense in their 3-3-5 scheme and with Bell can run the ball; the emergence of Brookshire could give them an arm to compete with the likes of Nevada’s Carson Strong, Fresno State’s Jake Haener and San Jose State’s Nick Starkel.

Arizona: the Wildcats took a step backward after showing well in a 24-16 loss to BYU in Las Vegas last weekend, giving up chunk plays of the sort that hurt them in 2020, when they allowed 473 yards a game, ranking 116th of the 128 FBS teams.

San Diego State: will play No. 21 Utah in Carson, Calif., on Saturday. The Aztecs are playing their home games this season in Carson while the new Aztec Stadium is being built.

Arizona: the Wildcats play host to FCS Northern Arizona on Saturday in their final nonconference game before beginning the Pac-12 schedule at No. 12 Oregon on Sept. 25.