Bryce Perkins' poise key to success for No. 21 Virginia 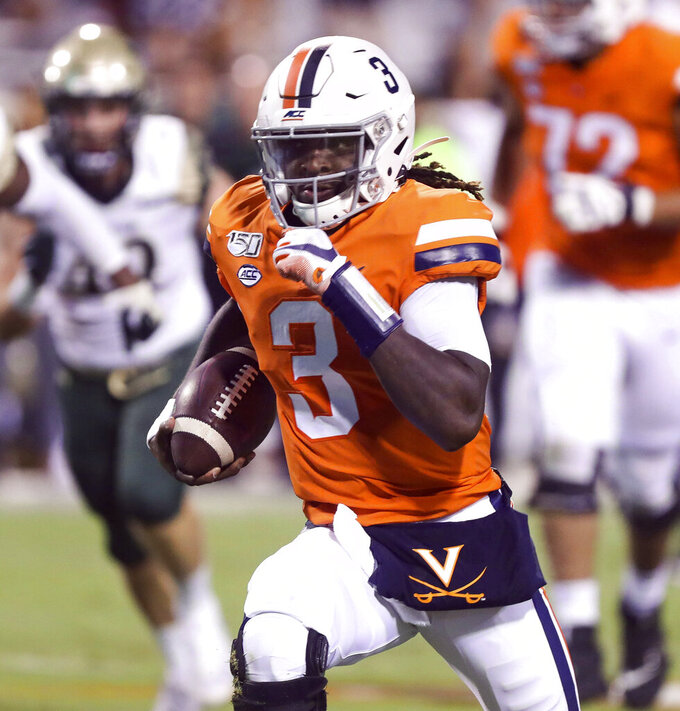 In fact, he encourages it.

Like any coach, Mendenhall likes having a plan and seeing that plan executed. But he knows that handcuffing Perkins would be the wrong approach.

The No. 21 Cavaliers (3-0) have won 11 of 16 games with Perkins as the starter and can match their best start since 2004 on Saturday night against Old Dominion.

Perkins has thrown two interceptions in each of the past two games, and Mendenhall blamed them on the QB trying to do too much. But the coach seems to believe the mindset that causes the Perkins to attempt throws that are ill-advised is the same one that allows him to perform in the clutch.

Perkins' confidence spills over to his teammates, too, especially when Virginia needs a play.

"Bryce is very calm," wide receiver Joe Reed said. "Very rarely does he ever panic. He's just matter of fact and tell us what we need to get done and we do it."

Added right tackle Dillon Reinkensmeyer: "Bryce kind of just does what he wants back there, and that's best for the team, because he's very good at football."

Against the Seminoles, the Cavaliers' trailed 24-23 after a missed extra point. Perkins led them down the field and the Cavaliers scored a touchdown with 2:34 to play. They decided to go for a two-point conversion and Perkins dropped back to pass, got pressure and rolled left, patiently awaited a block and side-stepped his way in for the conversion.

"That was a Heisman Trophy moment that he made," Old Dominion coach Bobby Wilder said Thursday.

"He's like a magician," Virginia receiver Hasise Dubois said. "It's very hard to get him down. Like sometimes if you have a crowd, he finds a way to get out of it."

It's the talent coach Tom Minnick saw at Arizona Western Community College, which Perkins led to the 2017 JUCO national title game. But Perkins wasn't able to showcase all his skills at the JUCO school.

Before transferring to the JUOC school, Perkins played at Arizona State. A freak practice injury at ASU left Perkins with two fractured vertebra in his back, threatening his career. He redshirted in 2015, missed 2016 with the injury and transferred.

"Shoot, I still wish I had the kid now to play because that's the type of kid you want on your football team," said Minnick, now the coach at Garden City Community College in Kansas. "Just a kid that does everything right."

Minnick believes the severity of Perkins' injury limited the interest of other Power Fiver programs, but the quarterback's body of work since he has been back on the field speaks for itself.

Stopping him, Wilder quipped, is "an all-day job. The first thing you've got to do is you have to have about 15 guys on the field."

Even then, he added, "You really can't expect to slow him down or stop him. You really just have to try to do your best to minimize the damage."