Bryce Williams' injury leaves another runner out for Gophers 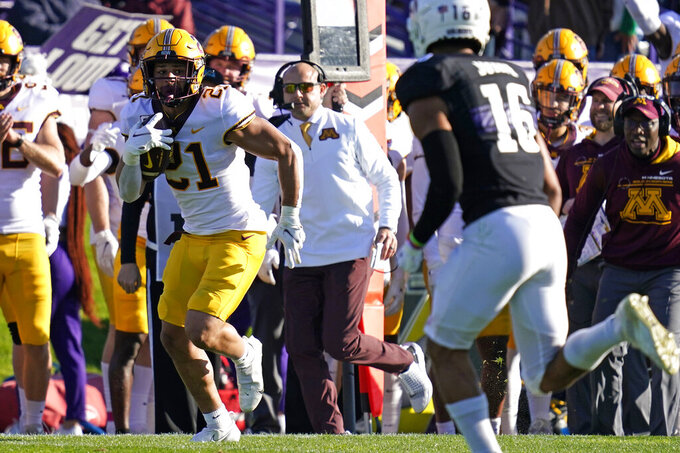 MINNEAPOLIS (AP) — Minnesota has likely lost another running back to a season-ending injury with Bryce Williams the latest to be sidelined for the ground-oriented Gophers.

Williams, a fourth-year player with 186 yards and three touchdowns on 37 rushes this season, appeared to hurt his lower left leg during a 19-yard reception in the first quarter at Northwestern.

“It looks like will be season ending. It’s unfortunate. It’s one of those years that’s kind of got us right now. But it’s the next man in, the next man up. Everybody’s on deck,” Fleck said.

Freshmen Mar'Keise Irving and Ky Thomas have taken over the workload in the backfield, but they're the only healthy scholarship running backs remaining on the roster. Linebacker Derik LeCaptain, one of the team's best special teams players, took some turns on Saturday and had a 24-yard touchdown run in the fourth quarter. The Gophers have also switched another player to running back, Fleck said.

“I told the entire team, ‘Listen, if any of you have ever carried a ball in any part of your career, if you have a picture with button from the YMCA league with a ball in your hand and you’re chinning it properly, you are going to be available, possibly, to run the football for us this year,'” Fleck said. “We’re going in, talking to their parents, talking to their aunts and uncles, and seeing if they ever did that, diving into some Pop Warner film.”

LeCaptain and the other new running back, whom Fleck declined to identify, were moved prior to the Williams injury.

“This has been a contingency plan for four or five weeks now. I’m proud of our guys for developing,” Fleck said. “Sundays, there’s a lot of that work we do with them to get them ready.”

The Gophers (6-2, 4-1) are second in the Big Ten and 15th in the FBS with an average of 222 rushing yards per game going into this weekend's home game against Illinois. Ibrahim, Potts, Williams, Irving and Thomas have each had at least one 100-yard game this year, and Irving and Thomas have both done so in two consecutive contests.

Irving was named the Big Ten Freshman of the Week, after rushing 19 times for a career-high 110 yards and two touchdowns at Northwestern in the 41-14 victory. He's the first true freshman in program history with consecutive 100-yard games in Big Ten play since Laurence Maroney had three in a row in 2003.