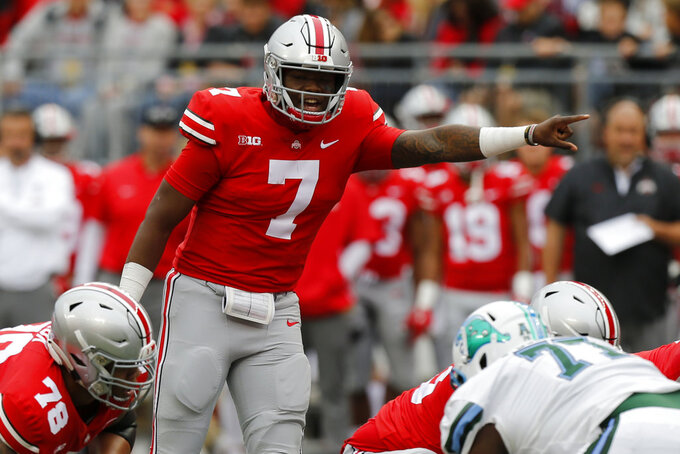 FILE - In this Saturday, Sept. 22, 2018 file photo, Ohio State quarterback Dwayne Haskins plays against Tulane during an NCAA college football game in Columbus, Ohio. No. 3 Ohio State is looking to get more out of its ground game as Minnesota visits. Quarterback Dwayne Haskins has piled up a nation-leading 25 touchdown passes, but the Buckeyes averaged just 3.2 yards per carry against Indiana last week. Injury-riddled Minnesota will try to rebound after dropping its first two Big Ten games. (AP Photo/Jay LaPrete, File)

COLUMBUS, Ohio (AP) — Ohio State quarterback Dwayne Haskins Jr. has been lighting up the scoreboard with touchdown passes. Next up is Minnesota, and the No. 3 Buckeyes will try to get their running game back on track.

Star tailbacks J.K. Dobbins and Mike Weber combined for just 3.2 yards per carry in the last two games. The focus will involve more push from the offensive line when the Buckeyes host the Gophers on Saturday.

Short-yardage situations have triggered some stress on the Ohio State sideline.

Haskins leads the nation with 25 touchdown passes and is on track to break school records this season. He's also a drop-back guy and less likely to grind it out in short-yardage situations for the Buckeyes (6-0, 3-0 Big Ten).

Meyer liked having the "Q run" in his back pocket when dual-threat quarterback J.T. Barrett was there. The coach acknowledged some talk among coaches about having shifty backup quarterback Tate Martell come in the game on short-yardage situations.

Minnesota (3-2, 0-2) has deeper problems, having absorbed season-ending injuries to two of its best players — running back Rodney Smith and safety Antoine Winfield Jr. The Gophers start true freshman walk-on quarterback Zack Annexstad , who has thrown five interceptions in the past two games. Freshmen and sophomores are carrying the load on offense.

"I hope everyone can see what we're becoming, because I can," he said.

Other things to watch in Saturday's game:

Haskins has brought big-play excitement to the Buckeyes.

He was named Big Ten offensive player of the week for the fourth time this season after throwing for a career-high 455 yards and six touchdowns against Indiana. One more of those awards and he'll tie Troy Smith for the school record. Smith did it in 2006 on his way to winning the Heisman Trophy.

If Haskins has another big game, look for the Heisman chatter to get even louder.

The Gophers have made true freshman Daniel Faalele the starter at right tackle, a switch made during the last game against Iowa when Anthony Nelson had three sacks while being blocked by sophomore Sam Schlueter. The Australia-born Faalele is listed at 6-foot-9 and 400 pounds.

"I think we just ride with him. Let him play. He's going to have to play. He's one of the strongest people probably in the Big Ten," said Fleck, on whether to preserve a redshirt season for Faalele.

Meyer talked more this week about the severe headache that dropped him to one knee briefly on the sideline during last week's game. He gets them because of a cyst in his head but insists it doesn't affect his ability to coach.

"I've been dealing with that cyst for many years, and we had the surgery (to drain it) several years ago," he said. "And when it does take place, it's just, you know, they give me some medicine and I feel fine now. Just something I've got to monitor."

Though the Gophers are tied for the third-fewest sacks in the Big Ten with only eight, junior defensive end Carter Coughlin is tied with Iowa's Nelson and Ohio State's Dre'Mont Jones for the conference lead with five.

Coughlin, a converted linebacker whose work with new pass rush specialist coach Marcus West has been instrumental in improving his technique, had a strip-sack of Nate Stanley last week deep in Iowa territory that set up a Minnesota touchdown.